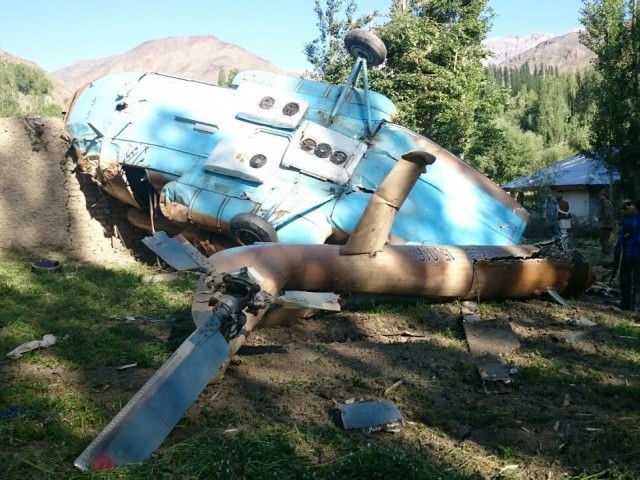 Wreckage of the MI-17 that crash-landed in Chitral on Thursday. PHOTO: SECURITY SOURCES

A Pakistan Air Force (PAF) helicopter, which was carrying flood reliefs goods, was forced to make an emergency landing in Chitral after developing a technical fault, Express News reported.

Reports said PAF’s MI-17 helicopter crash-landed in the Mastuj area of Chitral after it is said to have been partially damaged while carrying out flood relief activities in the region.

According to details, the military helicopter was rescuing 13 people in Chitral, in addition to evacuating a dead body. As it took off again, it hit a tree and crashed into a house. Resultantly, some of the passengers on board sustained minor injuries.

An eyewitness informed that smoke was rising from the site of the crash.

Deputy Superintendent Police Darosh Mohammad Zafar was also among the people boarded on military helicopter for Chitral at Kahoot. He is reportedly safe and escaped unscathed.

Pakistan’s armed forces are busy carrying out relief operations across the country, including Chitral, as floods continue to ravage various parts of Pakistan.

Earlier on Wednesday, ISPR stated that Chief of Army Staff General Raheel Sharif visited flood affected areas of Chitral where he was had been given a detailed briefing by local military commanders on the rescue and relief efforts by Pakistan Army, FWO and FC.

According to the ISPR, the army chief expressed his deepest regret over the loss of life and property and assured the flood victims that the military would stand by them till their complete rehabilitation.