In past, the accola­de was handed to such freedo­m icons as Mahatm­a Gandhi and Aung San Suu Kyi
By AFP
Published: August 4, 2015
Tweet Email 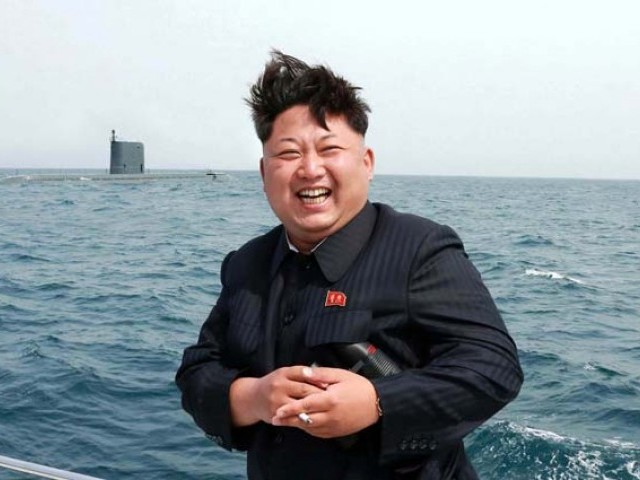 The decision to award the autocrat such an accolade has made headlines and triggered an outpouring of ridicule and disbelief. PHOTO: AFP

JAKARTA: The North Korean supreme leader Kim Jong-Un is all set to to receive an international peace prize, an accolade — handed in the past to such freedom icons as Mahatma Gandhi and Aung San Suu Kyi.

Indonesia’s Sukarno Education Foundation in September announced to honour Kim for his “peace, justice and humanity”

The decision to award the autocrat such an accolade has made headlines and triggered an outpouring of ridicule and disbelief.

A daughter of Indonesia’s founding president has defended honouring North Korean leader with an award for statesmanship, dismissing criticisms of his human rights record as “Western propaganda”.

Rachmawati Sukarnoputri confirmed the leader would receive an award from her organisation.

But Sukarnoputri brushed aside questions of Kim’s suitability for the award, saying the young leader “should be honoured for his fight against neo-colonialist imperialism”.

“The allegations about human rights abuses are untrue,” she told AFP.

“That’s all just Western propaganda. Those Western governments like to put ugly labels on North Korea.”

Her father, Indonesia’s first president Sukarno, established early ties with North Korea back in the 1950s.

Jakarta has maintained open relations with Pyongyang ever since. In April President Joko Widodo hosted a delegation from the reclusive state as part of an international conference.

It is not the first time Rachmawati’s foundation has handed its top prize to a member of North Korea’s ruling family. In 2001 the award was posthumously given to Kim’s grandfather, the state’s founding father Kim Il Sung.

Rachmawati drew parallels between the younger Kim and her own father, the leader of Indonesia’s independence struggle who ruled the Southeast Asian archipelago until he was overthrown in 1965.

“Sukarno was also accused of being an evil dictator who violated human rights, but this was proven otherwise over time,” she said.

Rachmawati is also the younger sister of Megawati Sukarnoputri, Indonesia’s fifth president, who remains one of the country’s most powerful political figures.

Kim is known for his ruthlessness in dealing with even the most senior officials suspected of disloyalty, following the execution of his uncle and one-time political mentor Jang Song-Thaek in 2013.

South Korean intelligence reported in May that he had his defence minister shot to pieces with anti-aircraft fire for insubordination and dozing off during a formal military rally.

Foreigners detained by the North Korean authorities are habitually required to make public, officially-scripted pronouncements of their guilt in order to help secure their eventual release.