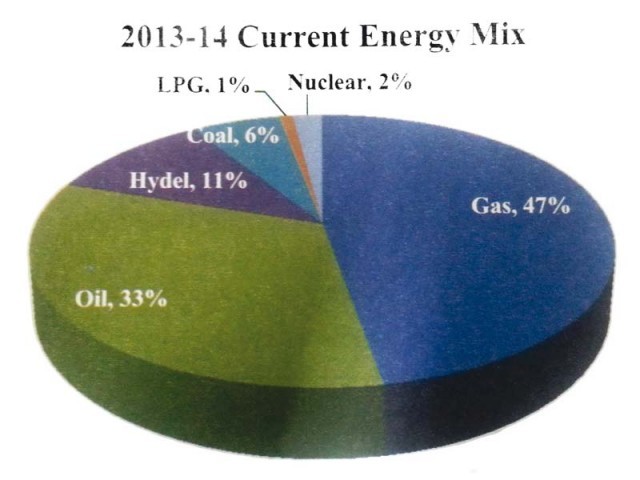 KARACHI: Meeting the energy challenge is of paramount importance for Pakistan’s economic growth and its efforts to raise human development levels.

To achieve high growth over the next decade to 2025 and to meet the objective of greater self-reliance, Pakistan needs, at the very least, a two-fold increase in primary energy supply and a three-time increase in electricity generation capacity.

The country, by virtue of its location and natural endowments, has many technologically feasible choices to meet its growing energy needs. The challenge lies in picking these options in such a way that satisfies commercial needs and tames political voices. Another formidable task is to utilise the country’s limited capital and capacity optimally.

With these challenges in mind, the Energy Experts Group revisited the Integrated Energy Plan 2011 and updated it for the period 2015-2025.

The broad vision of the energy plan is to meet the demand for energy from all sectors in a sustainable manner with greater reliance on development of domestic resources.

The real GDP growth for the 2015-25 period is projected at an average of 5% per annum, which compares favourably with the average economic expansion of approximately 3.5% over the past five years.

Pakistan’s energy sector is mired in crisis, which is recognised by the government in its Vision 2025. It strikes 4-7% off the country’s GDP annually which equals to a loss of between $10 billion and $15 billion.

The loss of energy means increase in direct global warming and higher costs to the economy. A 1% loss of electrical energy is equivalent to a loss of Rs13 billion in revenues per year.

The energy mix shows a heavy reliance on natural gas as a primary source of energy in Pakistan followed by oil, the bulk of which is imported. Nuclear, hydroelectric and renewable energy (insignificant at present) together form only 13% of the total. This is unsustainable as reliance on hydrocarbons increased from just under 80% to 82% in 2013-14.

The integrated plan suggests an urgent need of a national energy authority and a ministry of energy. It also calls for the formation of an intergrated energy policy to ensure consistency and coordination among different sectors, along with removal of government intervention in consumer pricing.

It proposes less dependence on hydrocarbons, especially imported fuels, to around 60% to 70% from the current 87% by 2025.

“If we have to achieve moderate to good economic growth, we need to allocate our cheap indigenous resources to those sectors of the economy which will produce the greatest benefit; and these sectors are power, industry and agriculture,” stated the report.

The report stresses need of a detailed analysis of energy use and intensity across all industries to have a better understanding of where wastages are taking place, and hiring of internationally reputed companies to audit the power sector and other major consumers.

It urges the introduction of proper unaccounted for gas (UFG) control system in both Sui companies as a 1% reduction nearly equals 40 mmcfd. “Gas subsidies or loss subsidies should be eliminated and instead the government should provide direct support to the segment of population below the poverty line,” said the report.

Also, no expansion of gas distribution system should be initiated till further discoveries and all thermal power plants must be coal-based or combined-cycle gas turbine plants to use LNG as this fuel has advantages over other liquid fuels.

As for the refining sector, it is the state’s responsibility to come up with a strategic storage capacity to meet the country’s needs during emergency and should be developed within three years to avoid any unforeseen supply disruption.

The plan stresses strengthening of the transmission and distribution networks and proper load flow studies to be carried out by third-party professional engineers. “Losses of more than 10-year-old power transformers, especially those overloaded should be measured at site.”

The report expresses fear that if Pakistan does not move towards implementing an integrated plan then it is certain to face a large and growing energy deficit during the next 15 years.