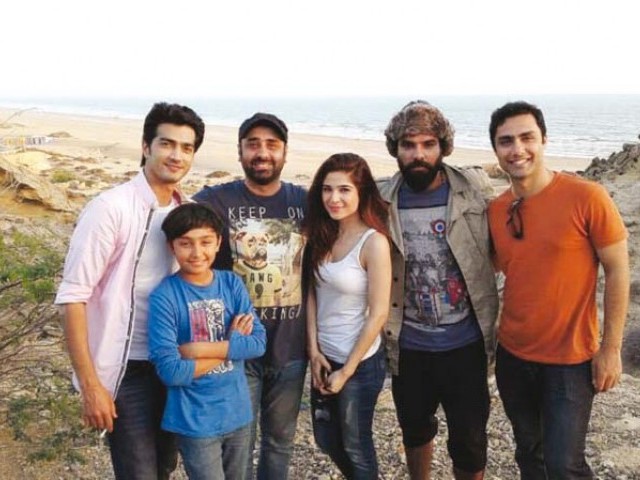 The film nosedives as soon as it hits the highway, with random characters running into the caravan. PHOTOS: FILE

Taking the road less travelled has its pros and cons. If you succeed in your journey you’ll have a great story to tell and if you fail, you end up getting lost somewhere in the wilderness. Wajahat Rauf took on a similar task by making a Pakistani road movie but, much like the green Foxy in the film, the story loses its ‘shocks’ before it hits the highway .

Written by actor-turned-writer Yasir Hussain, the film revolves around the life of a struggling banker Zaheem (Shehzad Shaikh). With a poster of Joker plastered in his colourful apartment, Zaheem in many ways represents the average urban Pakistani in his twenties: he hates his job, and his girlfriend Aashi (Ishita Syed) never misses a reason to be unhappy about their relationship. Zaheem is obviously not alone and is accompanied by a self-obsessed Sam (Ahmed Ali) and the bearded Moti (Yasir Hussain). Moti always wears a strange collection of berumudas and not to much of our surprise, he stammers.

His stammer is one of the many clichés that become redundant and unneeded after providing a few bouts of comic relief in the film. Their chemistry, however, is one to look out for as the three musketeers complement each other’s puns, gestures and mood swings quite naturally, giving a much-needed hook to the narrative.

Read: Karachi Se Lahore has been invited to premiere in Hollywood: Ayesha Omar The three of them are at a dance party when Zaheem finds out that Aashi is all set to get married to his family acquaintance who has just come back from Canada. To satisfy the Romeo in him, Zaheem decides to take a road trip to Lahore to stop Aashi’s marriage and is accompanied by his friends and neighbours Maryam (Ayesha Omar) and her younger brother Zeezo (Aasher Wajahat).

Ironically, the film nosedives as soon as it hits the highway, with random characters that serve no purpose in the narrative running into the caravan. What’s even more disappointing is that most of these characters are stereotypes, that too very inaccurate ones. Where in the world (let alone, the route from Karachi to Lahore) do Pathans have a festival where they indulge in ‘Kushti’?

That is what brings us to the biggest tragedy with Karachi Se Lahore: it is written like a stage drama, not even a theatre play. You only wait for one-liners that serve no purpose in pushing the narrative forward. Beyond that, you just keep waiting for the film to end. In fact, jokes like ‘Sardi Ka Saleem Javed’, ‘Garmi ka Hasan Jahangir’ and a short preachy speech about Pathans being peace-loving people at the end of that festival reminds you about the flow of a quintessential Umer Sharif stage drama. By giving prime importance to making people laugh, Hussain fails to concentrate on the plot, making people look forward to the next joke, and not what happens next.

Where Ahmed Ali makes good use of his experience in theatre, Shehzad Sheikh turns out to be the real surprise package. It seems like Wajahat shook him well before using him in the feature film and it turns out to be Shehzad’s career best performance.

There was barely anything for Ayesha Omar in the script, which is why her performance doesn’t get noticed more than a girl wearing a revealing top, in a jeep flooded by guys. Even her item number Tooti Fruity was a touch jittery and certainly not worth the hype. It relies heavily on inserts that make her thumkas seem rather mechanical.

You must look out for some honest and hilarious cameos by Pakistani musicians and the placement of some iconic Pakistani songs in the film. Kudos to Wajahat for using Noori’s Do Dill for the big screen, as the song leaves an impact much more soul-stirring than many of Bollywood OSTs.

Karachi Se Lahore releases in cinemas across Pakistan on July 31. A relativley shorter version of the film be screened in theatres.

Verdict: Karachi Se Lahore has hilarious moments that at times seem out of place. Watch the film to learn some new jokes, but opt out if you are looking for a good big screen experience.