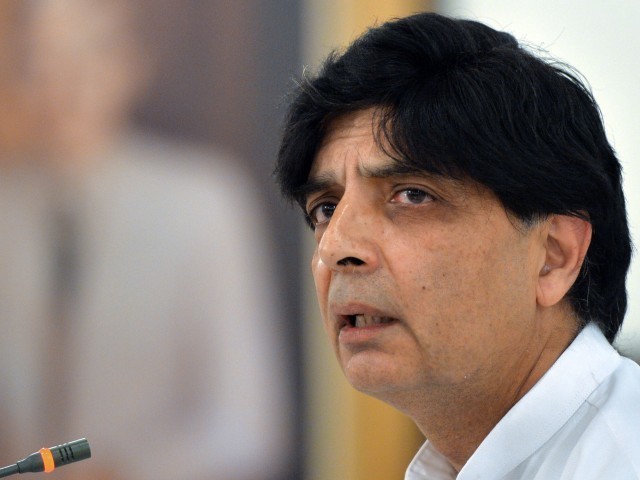 The minister revealed that estimated 400,000 foreigners arrived in Pakistan since 2007. PHOTO: AFP

ISLAMABAD: The government claimed on Thursday that incidents of target killings in Karachi have almost halved since the start of the Rangers operation in the city.

Claiming that the overall security situation of the metropolis has improved significantly, Interior Minister Chaudhry Nisar Ali Khan said on the floor of the House, “Karachi witnessed a 43% decrease in target killing, 37% in incidents of murder and 6.7% decrease in terror related incidents.”

Briefing the National Assembly on the ongoing operation in Karachi, Nisar said law enforcement agencies arrested 713 terrorists along with 58,603 suspects in thousands of raids conducted in the city. The agencies have recovered 14,253 arms, and that the number of fugitives increased by 9.4% during the operation, he added.

Over 280,000 immigrants have been living in Pakistan from some five major countries, Nisar informed the National Assembly.

“As many as 116,308 Afghan nationals are living as immigrants in the country, higher than any other country,” Nisar told the House. Besides Afghans, 52,486 Americans, 79,447 British citizens and 17,320 Canadians are residing in the country, the interior minister added.

Interestingly, around 16,501 Indians are also living in Pakistan.

The minister revealed that an estimated 400,000 foreigners have arrived in Pakistan since 2007.