Two men due in court for killing Zimbabwe's Cecil the lion

Two men due in court for killing Zimbabwe's Cecil the lion

Hunter has been identi­fied as Walter Palmer, dentis­t and experi­enced trophy hunter from Minnes­ota
By AFP
Published: July 29, 2015
Tweet Email 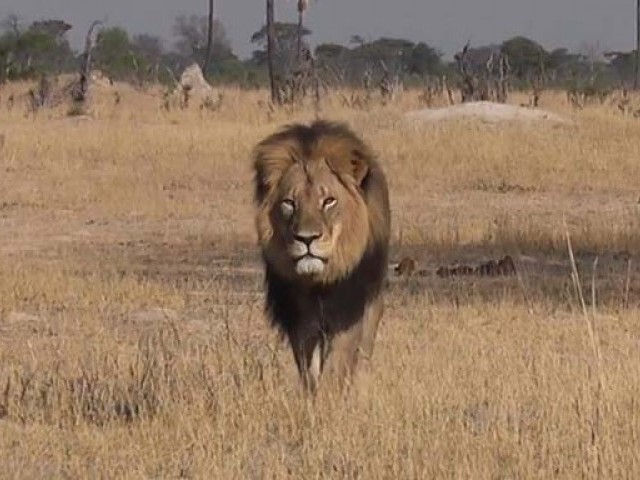 HWANGE, ZIMBABWE: Two men were due to appear in a Zimbabwean court on poaching charges on Wednesday after a wealthy American dentist killed a beloved lion just outside a national park, sparking criticism around the world.

Cecil the lion, a popular attraction among international visitors to Hwange National Park, was lured beyond the reserve’s boundaries by bait and killed earlier this month.

The hunter was identified as Walter Palmer, a dentist and experienced trophy hunter from Minnesota, who allegedly paid $50,000 for the hunt.

The two were seen at the court venue waiting for the hearing.

A family friend said that Bronkhorst believed he had acted legally during the hunt and was shocked to find that the lion was wearing a collar.

“This has just about destroyed the family, his wife has virtually had a nervous breakdown.

“The whole thing was perfectly legal. When they found the lion had a collar… he went and reported to the national parks immediately.

“This was just a terrible, very unfortunate act.”

Palmer issued a statement on Tuesday that suggested he had left Zimbabwe weeks ago.

“I have not been contacted by authorities in Zimbabwe or in the US about this situation, but will assist them in any inquiries they may have,” he said, without revealing his whereabouts.

Palmer, who shot Cecil with a powerful bow and arrow, said he had “relied on the expertise of my local professional guides to ensure a legal hunt”.

“I deeply regret that my pursuit of an activity I love and practise responsibly and legally resulted in the taking of this lion,” he said.

“I had no idea that the lion I took was a known, local favourite, was collared and part of a study until the end of the hunt.”

Amid a fierce outpouring of anger, radical US animal rights group People for the Ethical Treatment of Animals (PETA) called for Palmer to be hanged.

“He needs to be extradited, charged, and, preferably, hanged,” Ingrid Newkirk, president of PETA US, said in a statement.

The Zimbabwe Conservation Task Force charity said Palmer and Bronkhorst had gone out at night with a spotlight and tied a dead animal to their vehicle to lure Cecil into range.

It alleged Palmer’s first shot did not kill the lion, which was eventually shot dead 40 hours later.

Cecil, aged about 13, was said by safari operators to be an “iconic” animal who was recognised by many visitors to Hwange due to his distinctive black mane.

The tracking collar was part of a University of Oxford research programme.

Palmer is well-known in US hunting circles as an expert shot with his bow and arrow, and has travelled across the world in pursuit of leopards, buffalo, rhino, elk and other large mammals.

His Twitter and Facebook accounts and website of his dental practice — in a suburb of Minneapolis, Minnesota — were shut down after being flooded with blistering attacks.

A makeshift memorial formed outside his shuttered office as people outraged by the story dropped off stuffed animals and flowers.

Hwange national park attracted 50,000 visitors last year, about half of them from abroad.

Some hunting of lions and other large animals is legal in countries such as South Africa, Namibia and Zimbabwe, where permits are issued allowing hunters to kill certain beasts that are beyond breeding age.

It is outlawed, however, in Zimbabwe’s national parks.