Surge in flood deaths as scores of homes razed

Surge in flood deaths as scores of homes razed 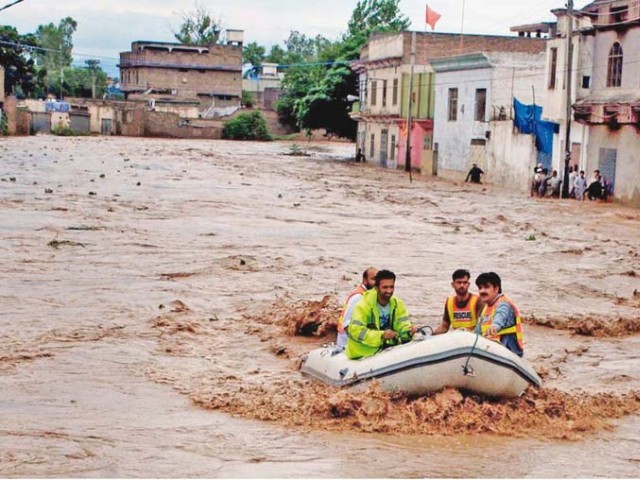 Rescuers in an inflatable boat patrol a neighbourhood in Peshawar. PHOTO: INP

Floods triggered by torrential rain left at least 14 more people dead and eight others injured across Khyber-Pakhtunkhwa  on Sunday, as the provincial information minister appealed for more funds to meet public needs.

Officials said four people drowned in the raging torrents in Chitral district. Among them were a young boy in Dak Ismail Khel village in Nowshera and a three-year-old girl who slipped and fell into a stream.

Four other people drowned after the car they were travelling in plunged into Khan Khwar River in Shangla, while a man was swept away as he tried to gather timber from the floodwater in the Maira Dandai area of Shangla.

Two other persons were swept away in Hazara as rain lashed the region for a third day, while a 17-year-old boy was swept away in the Mullagori area of Jamrud in Khyber Agency as he tried to gather wood from a stream.

Two men were also swept away by flash floods in the Khanbari area of Chilas town in Gilgit-Baltistan. Moreover, eight people – including seven of a family – were injured in a roof collapse in K-P.

Officials estimate that the flash floods have rendered more than 700 families homeless and washed away around 250 houses in Chitral.

The ISPR said 960 people were evacuated from Layyah and the surrounding areas, while more than 800 patients were provided medical treatment.

Bull dozers have been employed for restoration of the breached Jakhar Imam Shah bund, while a free medical camp has been set up in Rajanpur.

The Pakistan Army is assisting the civil administration in evacuating people from the flood-affected areas of Sadiqabad, Rahim Yar Khan, Khanpur and Liaqatpur. “Over 40,000 people and 73,530 livestock have so far been evacuated.”

As for the National Disaster Management Authority (NDMA)’s relief efforts, 10 mobile utility store outlets have been set up in Chitral.

The Frontier Works Organisation (FWO) has already started operating with the support of the K-P Communication and Works Department.

On the directives of Prime Minister Nawaz Sharif, in coordination with the army, the services of the FWO have been provided to the provincial government for speedy repair of road infrastructure.

In G-B, of the 2,800 NDMA tents placed with the district administration, 243 have so far been distributed among the flood-hit population.

One thousand food packs are also being made available for the people through utility outlets, with the assistance of the Provincial Disaster Management Authority of G-B.

Many mud houses in the suburbs of upper Sindh collapsed due to heavy rains and strong winds on Sunday, leaving dozens – including women and children – injured.

All the main roads and streets flooded with up to four feet of water accumulating in the low-lying areas. The monsoon rain started early in the morning and continued through the afternoon with brief gaps.

The worst-affected district was Khairpur, the hometown of Sindh Chief Minister Qaim Ali Shah. Around five feet of water accumulated in Kot Diji town, where the drainage system has completely collapsed. A similar situation prevailed in Ghotki, Naushahro Feroze and other cities and towns.

In Karachi, scattered rains were reported in some parts of the city. The Met Office believes that the metropolis could experience a flood-like situation since it is likelyto receive approximately 50mm of rain.