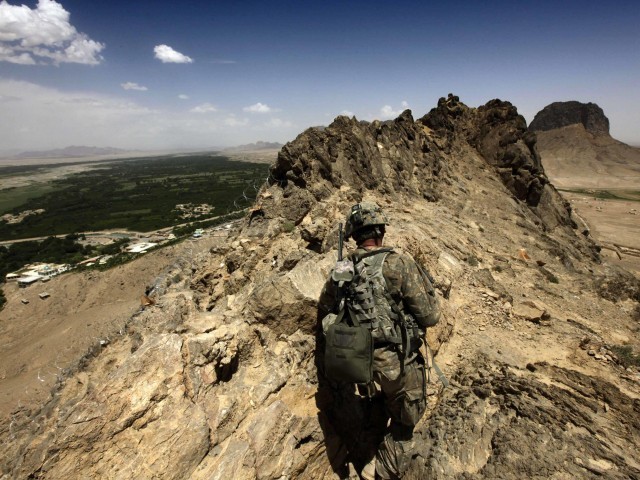 File photo of a US army soldier in Afghanistan. PHOTO: REUTERS

ISLAMABAD: The US is trying to find a ‘scapegoat’ by exaggerating the level of terror threat emanating from Pakistan’s tribal areas, say officials from the Pakistan Army and Foreign Office (FO).

Although Pakistan is yet to give an official reaction to the Obama administration’s Af-Pak review, Pakistani military and FO officials told The Express Tribune that they have “certain concerns” on some parts of the assessment.

In the year long review, the Obama administration concludes that the sanctuaries in Pakistan’s tribal areas are one of the major problems fuelling insurgency in Afghanistan. But Pakistan disagrees.

“The Americans’ assessment on the safe havens in the tribal areas is exaggerated,” said a senior FO official. “We do have a problem in our tribal areas but to think that the real threat to Afghanistan emanates from our side of the border is incorrect.”

Another official was more blunt in his assessment.

“The Americans are facing a difficult task in Afghanistan … their strategy, it seems, is not working as they would have liked [it to], so it is easy for them to shift the blame,” he argues.

The Obama administration believes that full-scale military operation in North Waziristan against the Haqqani network is vital to turn the tide in Afghanistan. However, recently, they have also acknowledged that the Pakistan military is too overstretched to go after the Haqqani network at this stage.

According to the officials, some of the findings of the Obama administration in the Afghan review are very “positive”. They say that Washington has now acknowledged that the use of military force alone will not take them anywhere.

“We have been telling the Americans to focus more on development and reconciliation,” said an official from the FO. “The review does indicate that the Americans have given due consideration to our proposals.”

It is believed that there is a difference of opinion between Pakistan and the US over how to find a solution to the nine-year-old war in neighbouring Afghanistan. While the Americans favour reintegration of low-level Taliban fighters into the mainstream Afghan political fold, Pakistan believes that a broad-based reconciliation process should be initiated to end the conflict.

Pakistan’s policymakers also expressed concern on the reversible gains made by the US in Afghanistan. “If the gains according to their own view are reversible, this is not a good sign,” cautions an official.