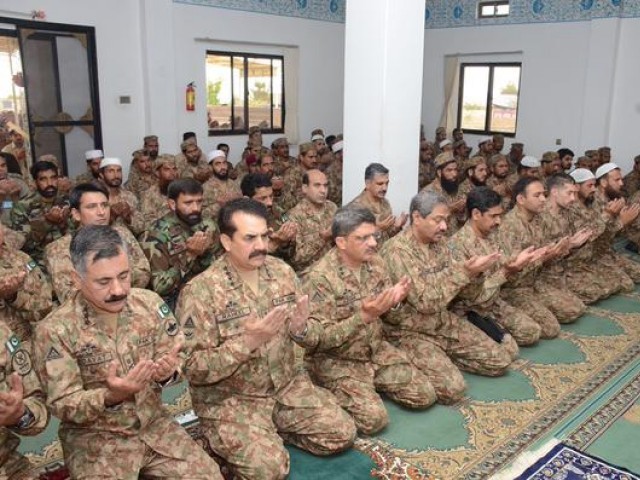 #COAS offering Eid prayers on the front lines with troops in Waziristan pic.twitter.com/sIFeOadGgp

“With terrorism being defeated and visible signs of security improving, Pakistan is bound to rise,” the statement said, adding operations against terrorists will continue till their complete elimination.

The COAS also visited Eidak in North Waziristan, where he met troops as well as the TDPs who have safely returned to their homes. Paying rich tributes to the martyrs and wounded, the army chief said we could never forget them, especially on the occasion of Eid.

Paying rich tributes to Shuhada said,we can never forget them at such occasion.Their best remembrance not to let their sacrifice go waste-3

“Their best remembrance is not to let their sacrifice go waste. These handful of terrorists are on the run and will not find any place to hide,” the ISPR quoted General Raheel.

He added that alongside FATA, counter terrorism operations in urban areas would also continue.

Read: Most of APS attackers have ‘met their fate’

“Our equal focus will now remain on finding terror financing, choking all their sources, and apprehending all financiers, abettors and sympathisers,” he said.

Our equal focus will now remain on finding terror financing,choking all their sources,&apprehending all financiers,abbettors&sympathizers-5

The army chief also visited TDPs camp in Bannu to spend time with tribal brethren from North Waziristan. He assured them of the wholehearted support and commitment of the army and the nation in providing them not only relief but in executing an ultimate resettlement plan for them.

Earlier on Friday, General Raheel arrived in Waziristan to spend Eid with troops.

Even last year, the COAS spent Eidul Fitr with army soldiers by staying overnight at the Miramshah camp.

Hussain was on guard outside the Sardar Bahadur Khan Women University on Brewery Road near Hazara Town when he intercepted a suspect. The suspect, wearing a burqa, detonated his suicide vest, killing Hussain.

According to ISPR, General Raheel Sharif said that they were proud of Talib Hussain who saved precious lives.

Meanwhile, he was briefed by operational commanders on progress of the continuing offensive against terrorists, Operation Zarb-e-Azb.

The COAS expressed complete satisfaction over the progress and achievements on the ground so far.