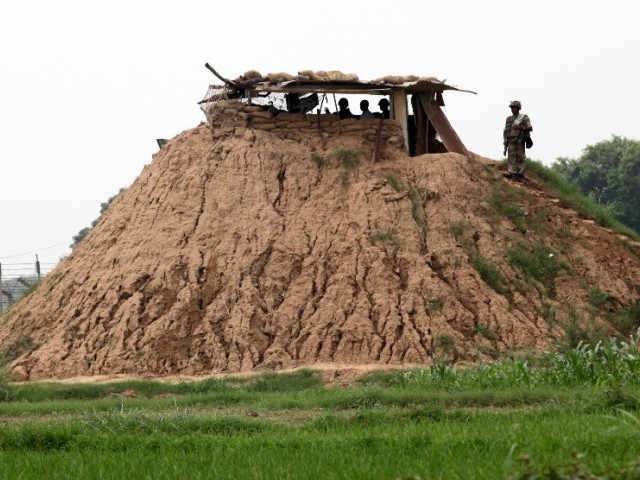 The security personnel opened fire and shelling at the Chaprar sector causing the casualties. PHOTO: AFP

Five people were killed and dozens others injured as India’s Border Security Force (BSF) resorted to unprovoked firing along the Working Boundary near Sialkot on Thursday.

“Ghulam Mustafa, 45, Rahat and Boota, residents of village Malana and Salehpur villages were killed due to Indian BSF’s unprovoked firing on Working Boundary in Chaprar sector near Sialkot,” the Inter Services Public Relations (ISPR) said in a statement.

Further, Zareena, 18, died at the Line of Control in Neza pir sector near Rawlakot.

The incident comes a day after an Indian ‘spy drone’ used for aerial photography was shot down by Pakistan Army near Bhimber along the Line of Control.

The incidents took place despite an ice breaking meeting between Prime Minister Nawaz Sharif and his Indian counterpart Narendra Modi in Russia on July 10.

In a joint statement issued after the talks, the two countries had decided to arrange meetings of senior military officials to lower tensions along the LoC, a de facto border that divides Jammu and Kashmir.

It is not clear whether the latest incident will have any impact on the proposed interaction between the two militaries.

Further, the Indian high commissioner in Islamabad was summoned to the Foreign Office on Thursday. Foreign office spokesperson Qazi Khalilluah confirmed on Wednesday evening that the Indian diplomat had been summoned and that the issue of the ‘Indian spy drone’ and violation of Pakistan airspace would be raised.