The injured was rushed to a hospital and is in stable condition. PHOTO: FILE
PESHAWAR:

Four people died while another was injured when a truck plunged into a ravine in Mishkili Koghuzi village in Golen, Chitral on Sunday night.

Speaking to journalists, Koghuzi SHO Tajuddin Lal said the truck, which was carrying stones from Chitral to Golen, fell into the ravine after its brakes failed.

“The driver lost control of the vehicle,” he said. “Four people lost their lives while one person was injured.” The deceased have been identified as Umer Daraz, the driver of the vehicle who hailed from Dir, Azamatullah, Haji Muhammad and Ijazur Rehman.” The injured was rushed to a hospital and is in stable condition.”

According to the SHO, countless accidents have occurred in the area because the road from Golen to Chitral is in a dilapidated condition.

“A trench has been dug for a power project in Golen,” he said. “The road cuts through this trench. As a result, a large number of accidents have taken place in the area.” 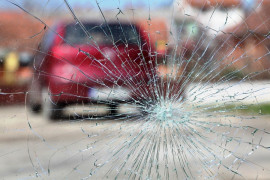