Environment-friendly: Traditional watermills still in vogue around the hills

Environment-friendly: Traditional watermills still in vogue around the hills 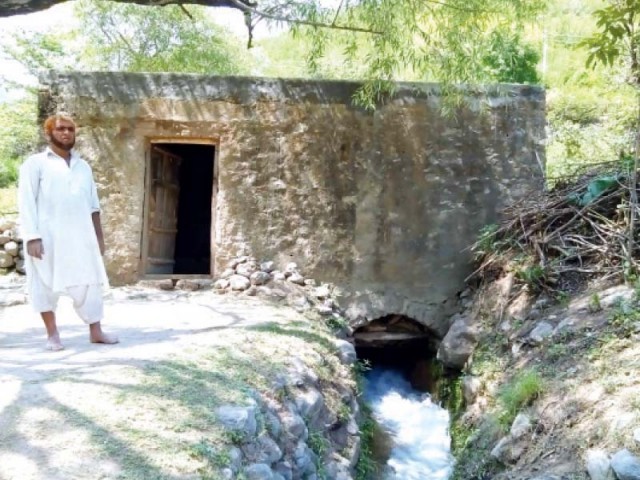 A man stands outside the mill in Shahdara (top). A view of the grinder inside the mill (bottom). PHOTOS: SHAZIA MEHBOOB/ EXPRESS

ISLAMABAD: People living around the foothills of the Margallas live in a fresh and peaceful environment, which may in part have motivated them to keep 300-year-old traditional watermills (jandars) operational. They use the traditional method of grinding grain into flour because, in their opinion, the flour produced is of better quality and taste compared to mass produced flour.

The environment-friendly watermills are scattered across villages on the outskirts of Islamabad — Shahdara Khurd, Shahdara Kalan, Kamlari, Phulgran and Gokina. The valleys are dotted with streams and canals.

These mills are powered by fast-flowing water channeled from streams, which turn the heavy grindstones, producing flour. Traditional watermills do not directly pollute the atmosphere, nor do they require electricity or fossil fuels.

One such watermill is operated by Ghulam Shabbir Awan, 58, in Shahdara Khurd, a famous tourist area which is thronged by residents of the twin cities during the hot summer.

He has been operating the watermill since his childhood and is determined to continue his forefathers’ business.

Residents of surrounding villages visit Awan’s jandar. He charges in kind rather than cash, taking a share of the flour from his customers.

“I take 6kg of flour for 40kg of grain as payment from my customers,” Awan said, claiming it was less than what most flour mills charged. The watermill is not Awan’s primary source of income. His day job is as an electrician at Quaid-i-Azam University (QAU).

Awan said, “I wish to keep my family’s traditional business alive and after me, through my children.”

He said that the flour ground in a watermill was natural and did not spoil as easily as mass-produced flour.

“The watermill is a symbol of our centuries-old culture, which is gradually disappearing due to the introduction of new technology,” said Javaid Akhtar, a resident of Shahdara Khurd.

“There is a need to keep this alive in order to introduce future generations to these environment-friendly mills,” he added.