One death too many: One death in childbirth every 37 minutes

One death too many: One death in childbirth every 37 minutes 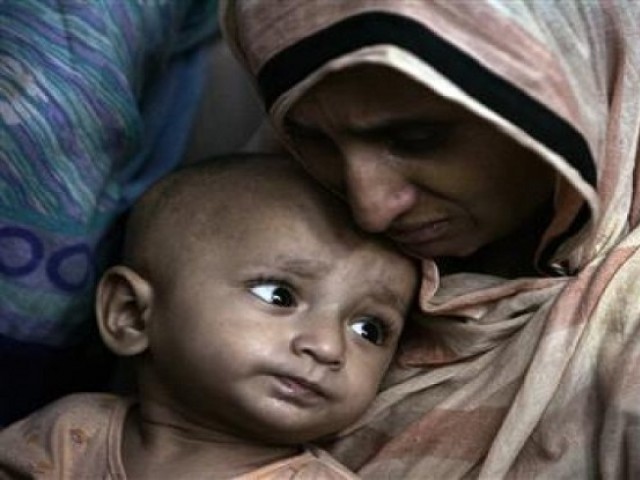 Experts expressed concern over the absence of family planning policy in the country. PHOTO: FILE

ISLAMABAD: One woman dies in every 37 minutes in Pakistan from complications during childbirth indicating poor maternal healthcare in the country. The problem is further compounded by the lack of investment in meeting the unmet needs of family planning.

Experts expressed concern over the absence of family planning policy in the country. They urged all the provincial health departments to formulate it urgently to save lives of women who die from childbirth complications. They were talking to The Express Tribune in connection to the World Population day which is being observed worldwide every year on July 11.

Read: Women in rural Pakistan champion the cause of population planning

According to the Population Council fact sheet 2015, it is estimated that every year on an average 14,000 mothers die in the country. However out of these 4,500 maternal deaths can be easily prevented through strengthening healthcare system, especially at primary level. There could be a significant drop in mortality rates if the huge gap of unmet need for family planning which currently is 20 percent, is addressed.

Dr Nasser Mohiuddin, Director National Institute of Population Studies (NIPS) said the population of the country is rapidly increasing as we fast approach the 200 million mark.

“It is unfortunate that after devolution of Ministry of Health (MoH) we lack family planning policy. This could help us find out the best possible methods of family planning to control increasing population,” he said speaking The Express Tribune.

There are only 3,000 family welfare centres across the country. There are 32 million women who are in reproductive age which is insufficient to cater to the need, he added.

Dr Mohammad Mir, Director Programmes, Population Council said in rural areas the situation of healthcare facilities is very poor and even lack the capacity to handle a normal delivery case.

“The major reason is that they have to travel long distances to give birth to a child in a proper healthcare facility. Many die during travelling as they are transported on trolleys” he said.

Qadeer Baig, country representative, Rutgers World Population Foundation – Pakistan, said in order to improve maternal health in Pakistan we need to engage men – fathers and husbands. We need to ensure through them timely access to health services to avoid ‘three delays’. The government had to invest in meeting the unmet needs of family planning in Pakistan.