Off to India: Hafeez receives visa for test

If the 34-year-old fails to clear the test, he would be facing a 12-month ban from bowling in international cricket If the 34-year-old fails to clear the test, he would be facing a 12-month ban from bowling in international cricket. PHOTO: FILE/AFP
KARACHI:

The Pakistan Cricket Board (PCB) confirmed on Wednesday that all-rounder Mohammad Hafeez’s visa for India has arrived and a new date for his bowling action test would be announced after due consultations.

Hafeez’s action came under scrutiny after he was reported by on-field umpires following Pakistan’s 10-wicket Test win against Sri Lanka. If the 34-year-old fails to clear the test, he would be facing a 12-month ban from bowling in international cricket.

The former T20I captain was expected to appear for the test in Chennai on June 30/ July 1, but his visa did not arrive in time, due to which the team management had to request the International Cricket Council (ICC) for an extension in the deadline.

He was also earlier reported for a suspect bowling action against New Zealand last year in the UAE. 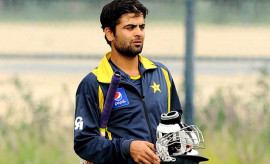 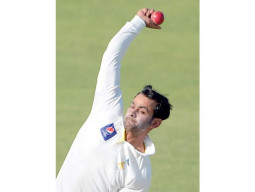