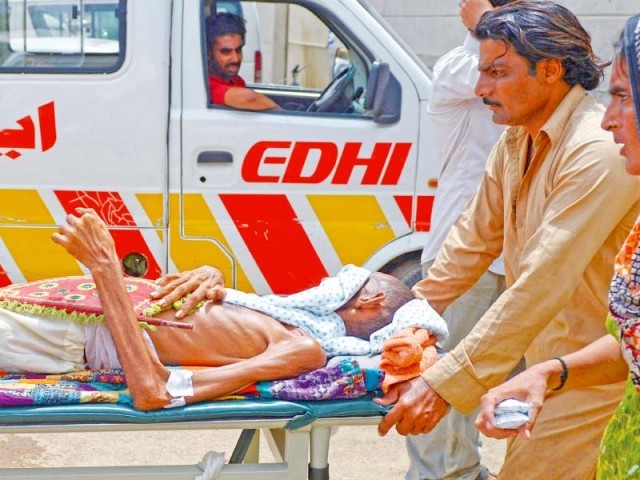 Relatives rush a heatstroke patient to a hospital in Karachi. PHOTO: AFP

Temperatures in Pakistan’s biggest city may have dropped for the first time in six days below 100 degrees Fahrenheit (36 degrees Celsius) but the number of fatalities from sunstroke and dehydration continued to mount on Thursday. Some 72 deaths were reported during the day as Karachi and Sindh’s denizens reeled from the sweltering heat, taking the fatality count to 1,001 – 179 of whom remain unidentified.

The Edhi Foundation said it had buried 79 unidentified bodies during the day because they were rapidly decomposing and could not wait for their heirs to claim them. The remaining bodies will be interred at the Mawach Goth graveyard on Friday (today).

An unidentified body is generally kept at the morgue for at least 20 days, but because of the overwhelming inflow at the facility and the condition of the bodies, the deceased are being buried sooner. “We can’t keep them for long,” said Anwar Kazmi, spokesman for the Edhi Foundation.

Weather experts in the meantime issued a chilling warning about the extreme weather and climate events that people in Pakistan and neighbouring India can expect with more frequency.

Both Karachi and Mumbai, the two most-populous cities in the Indian subcontinent, have experienced extreme weather and climate events – intense heatwaves and extreme rains, respectively – at the same time.

Meteorologists had forecast rains for Karachi and other southern parts of Sindh, but the system moved to Mumbai.

“The region will have more of such events in future as well,” warned Dr Qamaruzzaman Chaudhry, UN World Meteorological Organisation’s special envoy and former Pakistan Meteorological Department (PMD) director-general. “Heatwave isn’t linked with power outages,” he clarified. “We have to understand the phenomenon.”

He said heavy rainfall was recorded in Bahawalpur when Karachi was burning, adding that the ill-equipped PMD, despite knowing the impact of the heatwave in the neighbouring country, didn’t inform the government to take precautionary measures. “We lack equipment to detect the occurrence of heatwaves,” admitted an official.

“The miserable situation in Karachi and across Sindh was due to low pressure and depression in the Arabian Sea,” said Abdul Rasheed, Karachi Met Office’s focal person. He said the low pressure was about 500km from Karachi.

Read: Resting in peace: Over 500 communal graves dug up for heatwave victims

The low pressure in sea, heatwave, power outages and unplanned residential structure of the port city made the situation vulnerable. “It was an unusual phenomenon. It was a national disaster.”

He also believed that occurrences of extreme weather events are being recorded frequently in the region. There was nothing wrong last June, but we might have another unusual situation next year.

“Unfortunately, we aren’t prepared for any disaster,” Khan said while criticising the government, especially the National Disaster Management Authority.

“Transportation, population, increasing number of residential areas and lack of planning for any disaster by the state have resulted in this gloomy situation,” said Mohammad Ali Shah, chairman of the Pakistan Fisherfolk Forum. “Buildings have blocked wind routes. It is a climatic disaster. It is a result of global warming.”

He said the state disappeared when the people of Karachi started dying. “Is the only response to a disaster announcing a one-day public holiday or declaring emergencies at hospitals?”

“The Met Office must first prove its credibility, as most of its forecasts never materialise,” said Nasir Ali Panhwar, Centre for Environment and Development executive director.