The Muslim holy month is now third most import­ant religi­ous event for stores behind Christ­mas and Easter in the UK
By Web Desk
Published: June 23, 2015
Tweet Email 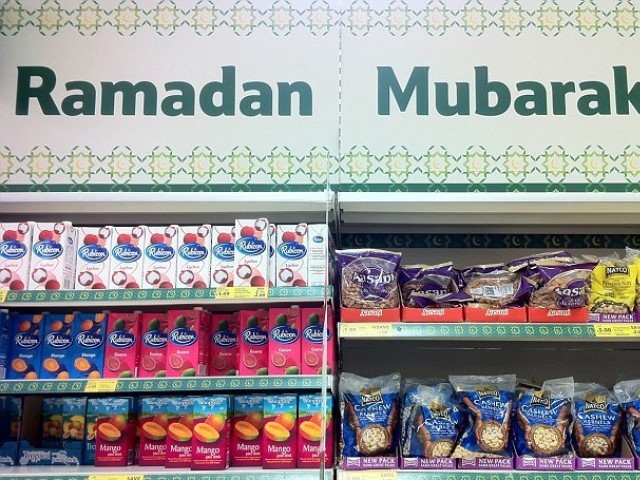 Thanks to Ramazan, supermarkets in Britain have witnessed sales rise by almost £100 million.

Three million Muslims in the UK break their fasts with sundown meals during the holy month, something that is seen as an opportunity by supermarkets, with retail consultants noting that the Muslim holy month is now the third most important religious event for stores behind Christmas and Easter in the UK.

Supermarket Morrisons is expected to sell more than two million tonnes of rice, while Sainsbury’s says rice sales are up at least 100 per cent year on year. Meanwhile, superstore giant Tesco believes sales will jump by at least £30million during the month.

Sainsbury’s world foods expert Hennah Baseer says “Ramazan is becoming an increasingly important calendar date for us. This year we’ve already seen an increase in customers buying Asian products from our stores. We have a promotional event for Ramazan taking place in 270 stores until July 21.”

Similarly, Tesco runs Ramazan promotions at more than 300 of its stores in Britain, and said demand for key products including flour, oil and dates rises by as much as 70 per cent.

“Ramazan is an important time in the calendar for many of our customers and colleagues and sees friends and families gathering together around the dinner table,” said a Tesco spokesperson. “Food plays a hugely significant role during this month, which is why we are proud to offer a delicious range of meals and products to meet the needs of our customers.”

Meanwhile, Morrisons shifts 80,000 boxes of dates during Ramazan, while it also experiences a 40,000 per cent sales uplift on its 10kg Amira rice, which is sold at half price for the month.

It is unclear at this point what exactly is the focus of these stores towards halal products and pre-cooked meals and how these are received during Ramazan.