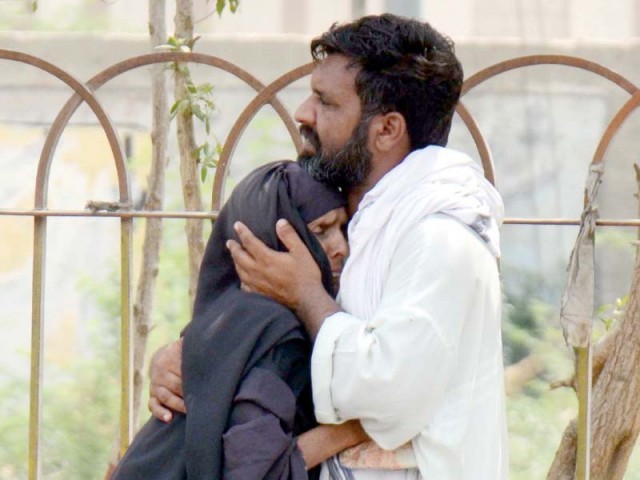 A family mourns the death of a relative outside the Edhi Morgue in Karachi. PHOTO: INP

The death toll from the intense heat wave sweeping across Karachi and other parts of southern Pakistan has climbed to 425 over the course of 72 hours, snowballing into a major health crisis in the country.

Droves of people continued to suffer from the effects of sunstroke and other heat-related complications brought about by the sweltering temperatures.

The premier has taken notice of the rising number of deaths and issued orders for tackling the situation, while the Sindh government elicited help from the army and the paramilitary Rangers to deal with it.

For three consecutive days all the major public and private hospitals – including the Jinnah Postgraduate Medical Centre (JPMC), the Civil Hospital Karachi (CHK), the Abbasi Shaheed Hospital (ASH), the Liaquat National Hospital (LNH) and the Aga Khan University Hospital – were overwhelmed by the sheer number of heatstroke patients. Private hospitals have  stopped admitting more patients, even as scores of people languished outside the wards of public hospitals.

The official death toll has reached 425, but independent sources believe that the number could be much higher, because a large number of the deceased have already been buried without being taken to any hospital.

Despite the increasing number of deaths being reported in the provincial capital, neither government officials nor any other organisation has made any arrangements for collecting and collating the data of the death toll.

Meanwhile, Prime Minister Nawaz Sharif issued directives to the National Disaster Management Authority (NDMA) to immediately take necessary measures to deal with the prevalent situation in Sindh, where the tenacious heat wave continues to claim lives. The NDMA chairman has asked the Karachi corps commander to assist the authority in this regard.

On the other hand, the Provincial Disaster Management Authority (PDMA) of Sindh has requested the Pakistan Army and Pakistan Rangers to render all possible services and assistance to alleviate the suffering of the people.

The JPMC has received the highest number of patients: over 700 were admitted in the emergency ward with heat-related complications, including heatstroke, fever, gastroenteritis and dehydration.

“Around 171 people have died according to our records,” said Dr Javed Jamali, the hospital’s focal person. He said a majority of the deceased were senior citizens. Dr Jamali said that more than 1,500 people have been brought to the JPMC from different parts of the city.

“The situation is very critical,” she said. “Around 70 people have died at KMC hospitals, including 64 at the Abbasi Shaheed Hospital.”

According to the breakdown of the number of deaths reported from other health facilities: 64 deaths were reported by the CHK, 30 by the Indus Hospital (where 250 people were brought on Monday alone), 23 by the Sindh Government Qatar Hospital Orangi, 22 by the LNH, 15 each by the Ziauddin Hospital (North Nazimabad) and the Lyari General Hospital, eight by the Sindh Government Hospital New Karachi and seven by the Ziauddin Hospital (Keamari). Sindh Health Secretary Saeed Ahmed Mangnejo said the provincial government has declared an emergency across Karachi.

Meanwhile, the Edhi morgue was also overwhelmed with the number of bodies that were being brought to the facility. The deceased that the morgue officials agreed to preserve was on the condition that they would be recovered within a few hours. Anwar Kazmi, the spokesman for the Edhi Foundation, said that more than 400 bodies were brought to them.

There was also a shortage of ambulances in different parts of the city.

The NDMA’s Ahmed Kamal said the authority has asked the PDMA Sindh to set up heatstroke centres at all public and private hospitals, as well as basic health units across the province. The NDMA has also asked the National Health Emergency Preparedness & Response Network to set up an emergency helpline to facilitate heatstroke patients. The authority also seeks better coordination with the ambulatory services.

Upper and central Punjab (including Islamabad), lower Sindh (including Karachi), the coastal areas, Mirpurkhas and some parts of Khyber-Pakhtunkhwa are expected to receive moderate and scattered pre-monsoon rains until Thursday, along with dust storms.

Muzammil Hussain, a meteorologist for the Pakistan Meteorological Department, said the pre-monsoon season had already started in various parts of the country on June 21. Karachi received light showers in some parts of the port city on Monday, bringing the mercury level down from 43°C to 35-38°C.