Fatal heat wave: Saved by the bullet, killed by the sun

Fatal heat wave: Saved by the bullet, killed by the sun 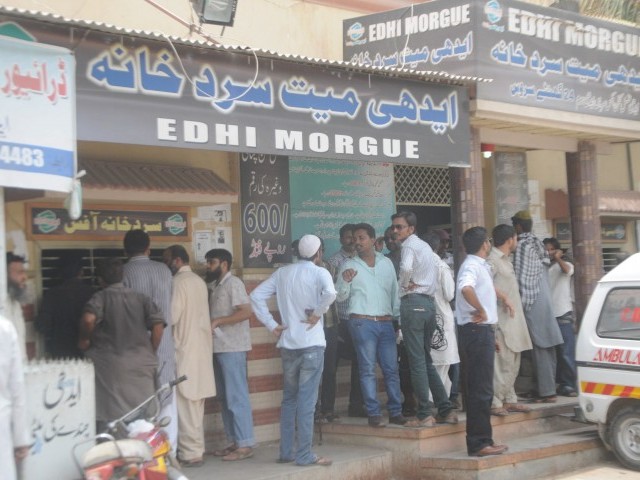 KARACHI: In a city where policemen’s lives are already on the line, a constable suffered at the hands of nature when he died from a heatstroke on Sunday evening.

Javed Ahmed, 45, showed up for work at Saddar Police Station on Sunday evening feeling feverish. When he collapsed, his fellow officers rushed him to Jinnah Postgraduate Medical Centre.

Read: Deadly heatwave shows no signs of easing as death toll climbs to 350 in Karachi

According to the hospital’s executive director Dr Seemin Jamali, Ahmed died from a heatstroke. “He was severely dehydrated and was unconscious when he was brought in,” she told The Express Tribune.

Ahmed was posted at Saddar around six months ago. Before this, he was posted at Clifton police station. He hailed from Toba Tek Singh in Punjab, where his body was taken for burial. “He was always on time,” said another police officer. “He loved the police force, which is why he came for duty even though he was sick. He died in his police uniform.”

Ahmed was part of the station’s patrolling teams that move around in their police vans. Ahmed’s team was patrolling around Lucky Star a day before he died.

For other officers at this station, things seem no better. Five police officers have called in sick since the heat wave struck. “This heat is bad. I have fever and I am still working,” complained the head muharir, Sohail Farooq, as he wiped the sweat off his forehead. Police officers demanded that their shifts be reduced. “We are on duty 12 hours a day which goes up to 14 hours,” said an officer, Farooq. “We hardly get any rest and we can’t take a day off.” Farooq pointed out that the station experiences load-shedding every two hours.

Another officer, Amjad, suggested their shifts be divided into three so that the officers are not exposed to the hot weather for long.

Stationed under the FTC bridge, police officers sitting inside a mobile demanded that their vehicles be equipped with portable cooling fans. “All police vehicles should be equipped with fans, in fact AC walay fans,” said one officer.

With Ramazan in progress, officers said that they don’t keep water coolers as they are fasting.

They did ask the authorities to provide ice so that they can cool down. “In sensitive areas, we have to wear bulletproof jackets along with this dark uniform, which makes us even hotter,” said an officer.

Meanwhile, the Rangers men boasted of their better training to endure this hot weather. “Our officers don’t stay in the sun for more than an hour or two,” said a paramilitary trooper. The Rangers also keep slabs of ice with them in the vehicles to keep their personnel hydrated.