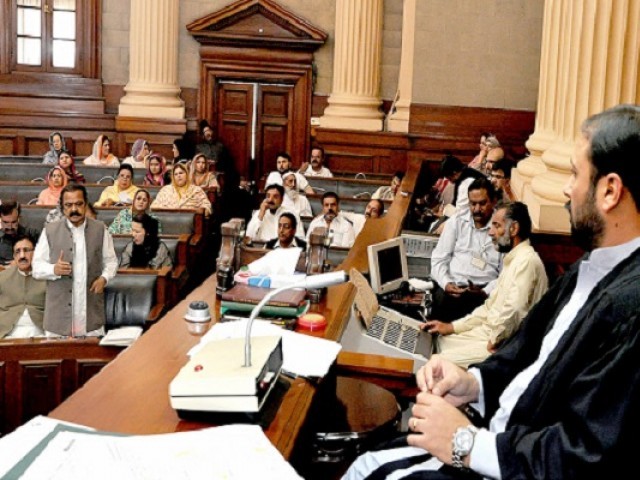 The Punjab Assembly passed the Punjab Motor Vehicle Transaction Licensees Bill, 2015, and an amendment to the Provincial Motor Vehicles Bill, 2015 on Thursday. The much-anticipated Punjab Protection of Women against Violence Bill was not laid before the assembly after opposition and treasury benches agreed on further consultation on the draft.

The bill related to women’s protection was not tabled in view of reservations expressed by some lawmakers. Law Minister Rana Sanaullah said the government had agreed to consider recommendations in this regard. He said lawmakers had three days to bring forth their recommendations. He said a committee including members from the opposition would review the amendments. He said 50 per cent of its members would be women.

Several members, including Azma Bukhari, Faiza Malik and Syed Waseem Akhtar, praised the minister for his proposal. Malik said this would set a good precedent in terms of ensuring effective legislation.

The Punjab Motor Vehicle Transaction Licensees Bill, 2015, aims at devising a mechanism for licensing and regulation of handing over unregistered vehicles to buyers. The amendment allows motor vehicle owners to use personalised vanity plates for their vehicles after submitting an application to the registering authority.

Several lawmakers criticised Punjab Police over the recent killing of two brothers in Rawalpindi and MPA Chaudhry Shamshad and his son in Kamoke.

Home Minister Shuja Khanzada said the case involving the MPA’s murder had been all but solved. He said some suspects, including facilitators and planners of the attack, had been arrested. “It is too early to reveal the details… it is, however, not a case of terrorism,” he said.

Sardar Shahabuddin, Arif Abbasi and Atif Mehmood raised the issue of killing of two brothers by some policemen in Rawalpindi. Abbasi asked the minister if the culprits had been arrested. Khanzada said the authorities had arrested some people.

Tahir Sindhu criticised the Sargodha DPO saying that many criminals were at large in his constituency. He accused the local police of perpetrating crime, including theft.

During the question-hour, several lawmakers expressed reservations regarding the standard of education in colleges.

Parliamentary Secretary for Higher Education Mehwish Sultana admitted that there was need for introducing regulations and legislation to lift the standard of education at colleges, including private colleges.

The chair directed the parliamentary secretary to take steps to improve the standard of education at schools as well.

Murad Raas said students of several government colleges had to attend private tuition centres to make up for their educational deficit. He said there was no policy for the promotion of MPhil and PhD teachers at schools. Syed Waseem Akhtar staged a token walkout when the chair did not allow him to speak on a point of order regarding the electricity tariff.

The chair reprimanded the parliamentary secretary for law and parliamentary affairs when Sheikh Alauddin said he was dissatisfied with the reply he had received on an adjournment motion regarding the state of public hospitals.

Arif Abbasi asked if the government had resolved issues related to protests by some visually-impaired job seekers.

Gorchani criticised the manner in which the visually impaired had protested in front of the assembly. Sanaullah said the government was committed to resolving the issues. He said the way they had protested was uncalled for. “Besides offering them jobs, the government has increased the job quota for the disabled.”

Maximum restraint: Do not shoot except in self-defence, IGP tells cops