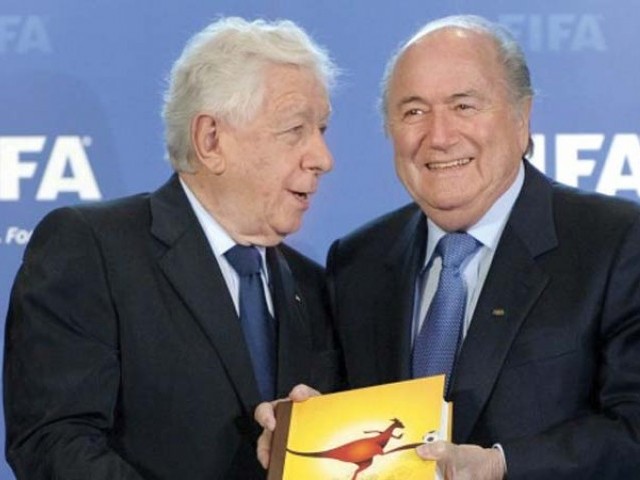 Frank Lowy has admitted that Australia’s bid for the 2022 World Cup was doomed to fail right from the start. PHOTO: AFP

SYDNEY: Football Federation Australia Chairman Frank Lowy admitted on Tuesday that the country “never stood a chance” in bidding for the 2022 World Cup and denied it paid any bribes.

Australia secured only one vote despite ploughing Aus$43 million into its pitch. It was competing against the US, Japan, South Korea and Qatar, which was controversially awarded the tournament.

“We never stood a chance,” he said in an interview with broadcaster Sky News, as FIFA grapples with two separate investigations by American and Swiss authorities into alleged rampant and long-running corruption within the organisation.

One of the probes is looking into the awarding of the 2018 and 2022 World Cups to Russia and Qatar.

“I’m not the best loser in the world. I have nightmares about all the work we did. And we didn’t get anywhere,” he added.

Lowy, the founder and head of global shopping centre empire Westfield, refused to say whether he believed Qatar secured the World Cup through corrupt payments. “I don’t want to make any accusations I can’t prove,” he said. “But awarding the World Cup to a country where it is 50-odd degrees during the games, I mean how would you think it was done?”

Lowy has himself come under pressure to explain how Aus$500,000 from Australia’s bid allegedly ended up in the pocket of former FIFA vice-president Jack Warner.

Police last week said they were looking into corruption claims surrounding the issue, with Lowy saying he had shared what he knows with authorities.

The FFA chief last week said in a statement the Australian money was paid to CONCACAF as a donation towards a centre of excellence in Trinidad and Tobago, but it was ultimately found that Warner, who also heads the CONCACAF, “had committed fraud and misappropriated the funds”.

Lowy denied on Tuesday the money was part of a corrupt process. “There were no bribes in this process,” said Lowy. “I have no concerns about that. The money wasn’t sent or given to Warner, it was a cheque transferred to CONCACAF.”

He added that sweeping changes were needed to clean up FIFA. “The culture at FIFA is not exactly suitable for a worldwide organisation today. I think that needs to change, as quickly as possible,” he said.

Blatter announced his resignation last week, just four days after being re-elected for a fifth successive term. But he is not expected to be replaced until a FIFA Congress in Zurich between December this year and March 2016.