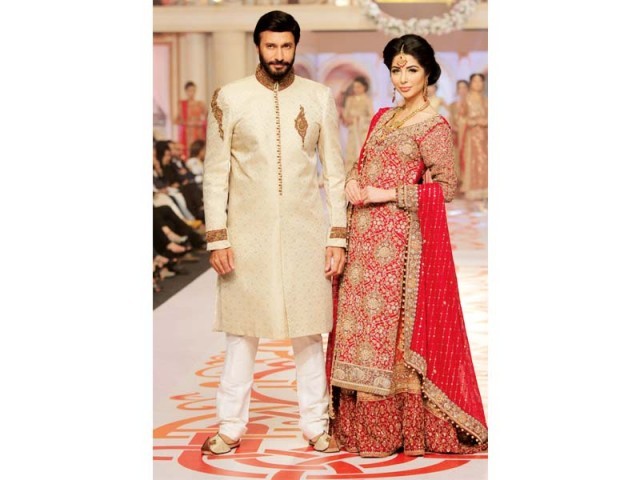 The epilogue was written with a contrary vantage point by some of the most coveted designers and the diverse range of fashion philosophies included a mix of the conventional and contemporary, adhering to the traditional colour palette of red and gold. All in all, the designers featured in the season finale tried to pay tribute to weddings of the subcontinent. This segment aimed to celebrate eight renowned designers of Pakistan who each displayed a show-stopping ensemble. As much as we loved Kamiar Rokni’s collection, Nickie & Nina’s modern designs warrant equal appreciation. Nida Azwer and Elan also remained true to their signature styles that are widely popular among fashion elites. Shamaeel Ansari brought forth her signature Kashmiri touch on the ramp. It isn’t just about brides when it comes to weddings; grooms these days are equally particular about their preferences for the big day. Keeping latest trends in mind, Almirah showcased a complete groom’s wear collection, the most distinctive aspect of which was that we didn’t have to see the typical white and off-white sherwanis. Embossed black motifs on Nehru jackets and kurtas in rust, red, purple and green were dominant on the ramp. The cuts boasted of simplicity and each design emerged out of earthy dark tones. The collection wasn’t less than a sartorial spectacle of the glorious Indo-Pak heritage. A mix of the traditional fabrics of organza, jamawaar and tissue with crepe, silk and chiffon, in an enriching scheme of copper, gold and red, took one back to the ancient sub-continental wedding. Reviving the vintage chatapatti, the collection also saw some trendy short shirts, cigarette pants and lehengas and saris. The highlights included a white and gold gharara, white and silver sari, razor-cut work shalwar-kameez, white and gold sherwanis and Nehru jackets for men. The intricate detailing defined the essence of Pardesy’s work. Contrary to its title, Khawab Mahal, the collection — inspired by its namesake romantic Urdu novel — was nothing but a nightmare. The grotesque blend of red, black and gold was nowhere close to the timeless romanticism that the designer tried to incorporate. As much as we saw an experimentation of contemporary silhouettes, the collection remains a big let down. The diamantes and semi-precious stone embellishments were chaotic and the velvet pants are not quite seasonal. Even the French Chantilly lace sari failed to create the magic we were anticipating. Overall, there wasn’t any opulence or grandeur and the collection failed to impress. The UAE-based design-house showcased signature cuts in ball gowns, fish-tail gowns and a cocktail dress. The use of sheer fabrics and trendy red, gold and silver embellishments on the neck and waistlines were dominant throughout. The silhouettes reflected a bride experimenting with this dramatic western collection. Breaking away from tradition, Mifrah’s collection involved a floral fiesta on a red, beige and white canvas. The customary gharara and sharara showcase was applauded for being elegantly paired with long shirts. What truly stole the limelight was the delicate kamdani on the dupattas and the amalgamation of stones and traditional embroideries, meshed in antique kora dabka. The choice of fabrics included atlus, jamawaar, khaddi silk net among others, giving the modern bride an ethnic look. The La Joya collection was based on a contrasting palette of silvery grey, white and baby pink. The short hemlines, ethnic embroideries and intricate embellishments of crystals and pearls appeared divine – a look sought by many brides. With a minimalist approach, the range depicted designs that are best suitable for summers. However, what made the collection stand out were its showstoppers, Wasim Akram and his wife, who added the extra oomph that had been missing all along.