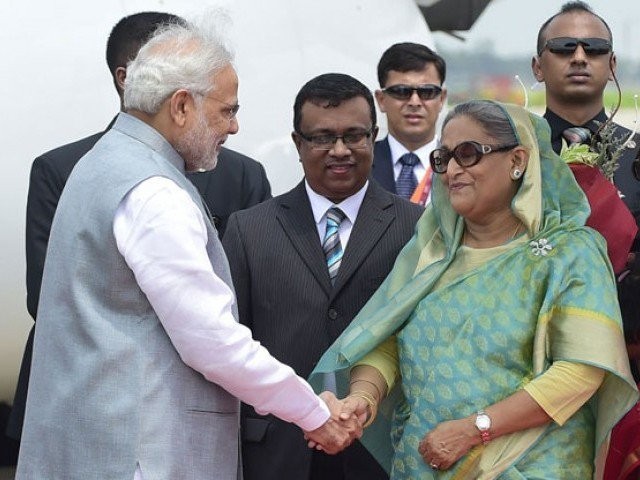 MUMBAI: Prime Minister Narendra Modi has sparked outrage after he praised his Bangladeshi counterpart for her courage to fight terrorism “despite being a woman”.

Triggering an avalanche of criticism on Twitter, #DespiteBeingAWoman soon became one of the top trends on the micro-blogging site on Monday, with users kept expressing anger at what they said was a bigoted and sexist remark. Those who criticized also posted pictures of famous female scientists, politicians and athletes.
Read: India, Bangladesh seal border pact as Modi visits

Modi, who was on a two-day official visit to neighboring Bangladesh, on Sunday told an audience at Dhaka University that Prime Minister Sheikh Hasina showed that she was committed to ending terrorism which had plagued both South Asian nations.

“The world has still not found a solution on how to tackle terrorism. Even the United Nations (UN) is not in a position to provide guidance,” Modi said. “I am happy that the Prime Minister of Bangladesh, despite being a woman, is openly saying that she has zero tolerance for terrorism. I would like to congratulate Sheikh Hasina for her courage to deal with terrorism with zero tolerance,” he added.

Twitter users went into frenzy early on Monday as Modi’s comments were picked up by local media, with many taking pot-shots at the Indian leader’s remark.

How can you even say or think #despitebeingawoman when your own country had a great female PM way before most first world countries! Shame!

Some users chose sarcasm to make their point.

ok. off to work. after cooking sending kid to school to write big story and run errands. like every other woman i know #despitebeingawoman

Pistorius to be released on parole in August, says family member