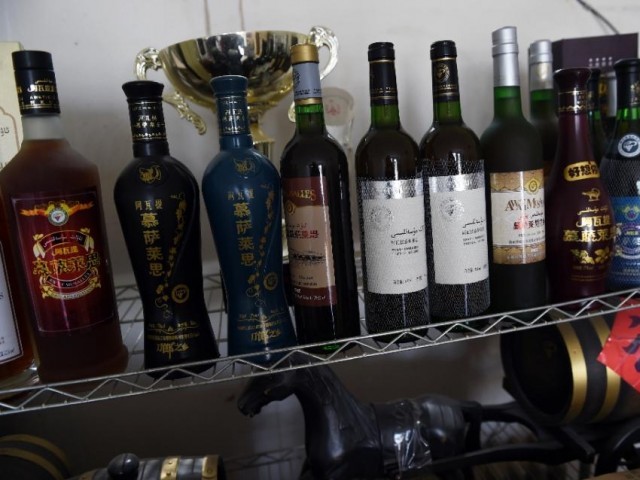 When Chen Naibao got into the wine business, he left out the pigeon blood and lamb meat that have been hallmarks of vintages in China’s Xinjiang region for more than a thousand years.

The animal parts are usually added to enhance flavour and increase the supposed medicinal qualities of museles, a traditional wine raved about in Tang dynasty poetry and long fermented by local Uighurs, despite the prohibition on alcohol of their Muslim religion.

Deep red, its unusual ingredients give it a pungent, musty nose and a sweet-sour, spiced taste, akin to a vermouth.

Chen’s recipe has extra sugar and his own production is noticeably sweeter, even cloying, with a more golden-brown hue.

Xinjiang, home to most of China’s more than 10 million Uighurs, sees sporadic violence authorities blamed on separatists, which has increased in intensity and spread beyond its borders in recent years.

Uighurs say they face discrimination and restrictions on language, culture and religion, but China counters it has brought development and raised living standards.

It is unclear when exactly Uighurs started making museles, but during the 618-907 AD Tang dynasty, considered the peak of Chinese civilisation, poets referred to it as “Western nectar”.

Museles is often spiced with saffron or cloves in addition to pigeon blood, whole pigeon or lamb meat, and is typically aged for two months in ceramic vats.

But Chen grew up and still lives partly in Jiangsu, more than 3,700 kilometres away on China’s eastern coast. He set up the business only four years ago after buying an existing winery, and has little time for its heritage.

“I took this Uighur wine and made it better,” he boasted in his spartan office at the two-hectare vineyard — he buys in most of his grapes.

“We have science and ordinary Uighurs making wine don’t understand any of that.”

Despite breaking from tradition Chen’s winery in Awat near the Kyrgyz border has a key advantage over local firms that have been making museles for generations: government financial support.

Chen recently built a $800,000 extension to his winery and upgraded the boilers, raising his potential capacity to 1,000 tonnes a year.

One of Beijing’s subsidy schemes provided 1 million yuan of funding, while smaller Uighur wineries in the area have enjoyed no similar largesse.

“By virtue of having the programme, the government can say, ‘look we’re developing the region’,” said Reza Hasmath, a professor of Chinese politics at Oxford University. “But they don’t take that extra step to create greater awareness and access to the programmes for Uighurs.”

Such offers are often only learned of through word-of-mouth among well-connected businessmen elsewhere in China, but the effects are more pronounced in Xinjiang, Hasmath added.

The Xinjiang government spent 530 million yuan on small and medium business programmes in 2013, according to the regional budget.

That does not include central government schemes like Chen’s. Comprehensive figures for them are not made public, but the regional cotton industry alone received 3.5 billion yuan from Beijing last year.

Despite alcohol being forbidden in Islam, many Uighurs view museles more as a type of medicine than wine, taken like vitamins.

“Before, I didn’t drink alcohol or smoke, and I still don’t smoke,” said Iburamzi Emin, 64, a winery caretaker. “Recently I’ve started to drink museles because it’s good for my health and can treat diseases.”

Iburamzi drinks one cup in the morning and one at night, on his doctor’s orders.

Aysha Ghayit and her Awat Ruby Museles Winery stand in contrast to Chen and his venture. Her family has been making museles at home for generations, and have built up their business over the last decade and now produce 100 tonnes a year.

It is just a tenth of Chen’s capacity and Aysha said they would like to expand, but have no funds to do so.

“We built this all ourselves, one building at a time,” the tracksuit-clad businesswoman said, gesturing around the winery. “No one helped us, we didn’t get any government subsidies.”

But some say that official funds given to Uighur-owned businesses generate poor returns.

One Uighur government official in Xinjiang, who declined to be named since he was not authorised to speak to foreign media, said he tried to help his fellow Uighurs by helping them apply for government funding and directing money to Uighur-owned businesses.

“When you give a Uighur subsidies, there’s a chance he won’t follow through,” said the official. “I’ve seen it many times. But the Han are more organised, and in my experience, they finish their projects.”