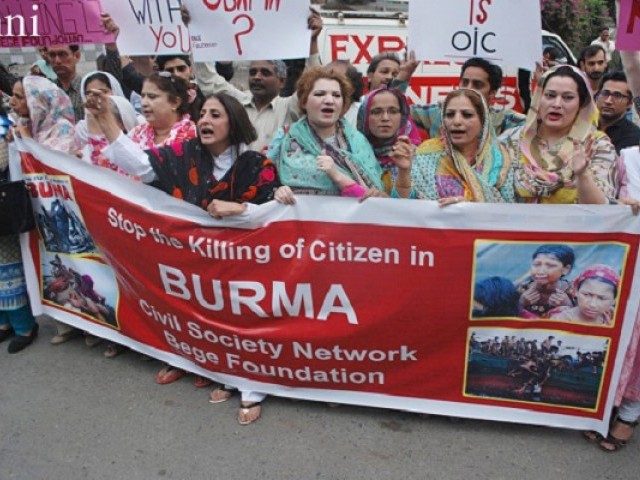 Civil Society protesting against the killing of muslims in Myanmar. PHOTO: EXPRESS

LAHORE: The international community should take immediate steps to save members of the Rohingya Muslim community, said Abdullah Malik, the Civil Society Network president, on Wednesday.

He was addressing participants of a demonstration held to highlight the plight of Muslims living in Myanmar.

“We want the United Nations to ensure that the Rohingya are given their due rights. Pakistan should raise the issue at all international forums. The Organisation of Islamic Cooperation (OIC) should create pressure on Myanmar over the issue,” he said. “The Turkish prime minister recently announced aid for the Rohingya people. The Pakistani government should also do so,” he said.

Sajjida Mir, a former MPA, said that the US president had taken notice of the issue. “However, Islamic countries have not raised their voice so far in support of the Rohingya. The civil society and has always taken a stand against the persecution of minorities,” she said.

She said that Pakistan should play a more active role in the rehabilitation of the Rohingya refugees.

Taranjeet Singh highlighted the history of the issue, saying that the Rohingya community members had been denied citizenship by Myanmar. “These people have been living on boats because Malaysia, Thailand or any other country is not willing to allow them ashore,” Singh said.