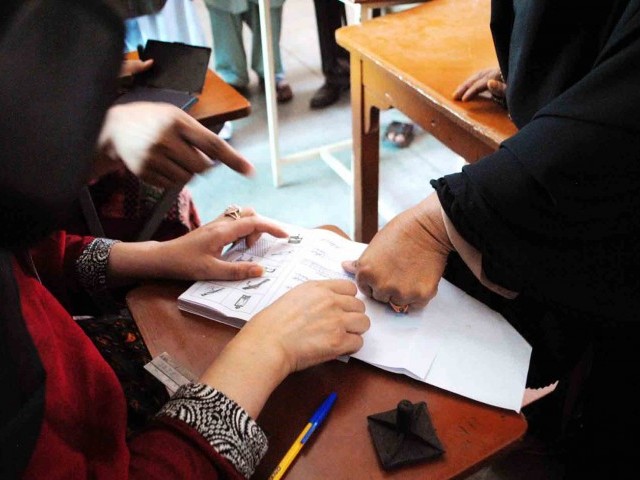 The polling process was to start at 8am but the schedule was followed at only around 13% of the stations, states the report. PHOTO: PPI

PESHAWAR: In a report issued on Sunday, the Free and Fair Election Network (FAFEN) gave an overview of the local government elections across the province, stating there were massive irregularities and misconducts in the voting process that moved at a snail’s pace.

Around 987 trained observers were deployed in 978 wards across the province and the preliminary report is based on information received from 50% of all the wards, said FAFEN CEO Shahid Fayaz while addressing the media at Pearl Continental Hotel on Sunday. “The observers reported 81 cases of violence were seen in 18 districts, including Bannu, Charsadda, Mardan, Swabi and DI Khan.”

The polling process was to start at 8am but the schedule was followed at only around 13% of the stations, states the report. According to the CEO, late arrival of polling officials and absence of election material caused the polling stations to open later than the given time.

In many areas, voting started later than it was supposed to but even after it began, the process did not go about smoothly. The report states breaks in the voting process were observed at 106 wards throughout Khyber-Pakhtunkhwa. Polling agents have been reported to have interfered with the work of polling officials. Moreover, activists of some political parties and candidates were seen taking over around 19 polling stations in Haripur, Peshawar, Bannu, Lakki Marwat, Nowshera and Mardan.

The report confirmed that women in different areas were barred from voting. It stated several reasons, including cultural barriers, kept women from voting in 63 wards. In this matter, Dir is said to have topped the list while Lakki Marwat and Mardan stand second and third respectively.

Other issues that contributed more to the chaos were on the part of the election commission. The CEO said a detailed district-wise polling scheme was not up on ECP’s website. Even polling officials at the stations were not enough to quickly process votes stamped on seven different categories on the ballot paper.

The faults and disturbances combined into a hodgepodge due to which voters could not be facilitated. FAFEN Chairperson Zaheer Khattak, who was also present on the occasion, said the count of voters at the local bodies’ elections was more than that in general elections but due to the long and slow process and dearth of polling stations, nearly half of the voters could not stamp the ballot papers.

Not equals: Women of Upper Dir rise against disenfranchisement