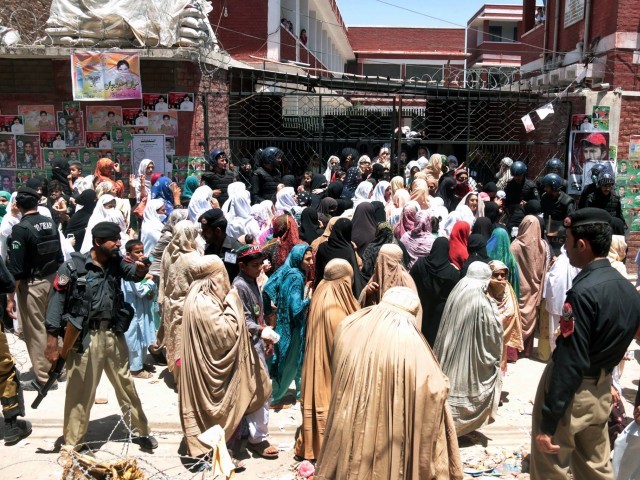 Voters wait to be allowed into the polling station established at Begum Shahabuddin School in the walled city. Photo: Muhammad Iqbal/Express

Thousands of women came out to vote for their favoured candidates yet certain—some predictable—areas still saw reason to prevent women’s suffrage. Women in Peshawar could be seen queuing up across the district, undeterred by the heat or the mismanagement at polling stations.

Even a spattering of violence and brawls did not cause women voters to leave.  Yet, the ‘second sex’ in Dir, Swat, Charsadda and other districts was less than lucky. In some places, online reports emerged of men in burqas trying to vote at women polling stations.

Much like the recent by-polls in Lower Dir, cultural restraints and possible under-the-table manoeuvring kept mostly women voters at home despite the backlash against political parties. They allegedly reached an agreement to bar women from voting in the by-polls in the area and the poor turnout for local government elections gives credence to this belief.

Activist Shad Begum, who was in Dir, reported on Twitter that no women voted in Lal Qila tehsil in Lower Dir. A handful of women showed up at polling stations in Timergara, Mian Kalay and Balambat, she said.

Professor Luqman Taimur told The Express Tribune his daughter Mushka Taimur and her friend Anila Sarwat voted for the first time in their lives. Luqman said they went to a joint polling station in the area.

Chakdarra Assistant Commissioner Zahid Warriach told The Express Tribune that all arrangements had been made for women to vote, but authorities could not force somebody to come out. “We cannot do anything if women do not come out to vote,” Warriach said.

Safyan, an employee of Shirkat Gah, visited polling stations in Mayar, Gosam, Khazana, Kotky and Tor Qila of Lower Dir. He said women were reluctant to come out to exercise their constitutional right and came out in very small numbers.

Safyan said they were unable to find out any proof of an agreement between political parties and whatever arrangement there is seems to be verbal.

At almost every women’s polling station, save a few in University Town, Hayatabad and some other areas in Peshawar, there was complete mismanagement, allegations, quarrels, and constant interruptions in the electoral process. Subinspector Mukamil Khan, “We don’t have woman police officials to regulate this crowd.” The K-P police lacks women officers; policemen were deployed who left voters to settle their issues among themselves, he added.

In Pakha Ghulam, women voters even occupied the table of the presiding officers. “It is the PTI women who have snatched ballots from voters and stamped it,” alleged Naheed, a woman voter

Nargis Perveen, the presiding officer there, told The Express Tribune that 1,915 women’s votes were registered “I have been accused of rigging and supporting the PTI,” she said. “I have stopped the polling in protest as I belong to an honourable family and am merely performing my duty here,” Perveen added.

Women came out to vote in greater numbers in urban Swat while fewer showed up in rural areas.

In Jurah, Matta tehsil, there were long queues of women, but polling staff was absent. A significant portion of women did not vote in Kabal tehsil, while a jirga decided to bar them from voting in some areas of Odegarama.

Women were barred from voting in Nara Amazai UC of Haripur. A district council candidate told The Express Tribune all seven polling stations of the UC were declared off limits for women following a verbal agreement between candidates.

When approached, district returning officer Humayun Khan said he is still gathering information and will share details at a later stage.

Not a single vote was cast by women of the Sarangzona UC of the district. “No jirga or cleric has barred women from voting. It is a usual norm in our part of the world,” said elder Zoman Mehsud while talking to The Express Tribune. Following a brawl between locals and the police, the women’s polling station in Kari Umar Khan area was also padlocked.

The women’s polling station in Luchra UC of DI Khan was also shut down after workers from PTI and PML-N gathered outside the station, hurling abuses and accusing each other of rigging. Paharor polling station, reserved for women, remained unmanned with no polling staff present.

Pahar Khel and Khero Khel Pakka were two areas of Lakki Marwat district where women were barred from voting. In Khan Khel, out of the four candidates vying for a seat, three agreed in principle over the ban. However the fourth election hopeful protested, forcing security officials to intervene.

Talking to The Express Tribune, in Battagram Jamiat Ulema-e-Islam-Fazl candidate Quddus Khan said a jirga unanimously decided to keep women from voting in Kass Qalandar village council. “About 250 to 300 women were deprived of the right to vote,” he added.

Despite the dominant tribal order in Torghar district, women voters were taken to polling stations by candidates who walked them through the polling process.

Vote at your peril

Qalandar Khan, who was outside a polling station in Charsadda, said women have been allowed to vote, but the system was designed to discourage them. There are no facilities inside the polling station such as drinking water, shade or even electricity. In some cases, the women are uneducated and therefore misguided by the polling agents. However, there was a fair showing of women in the region.