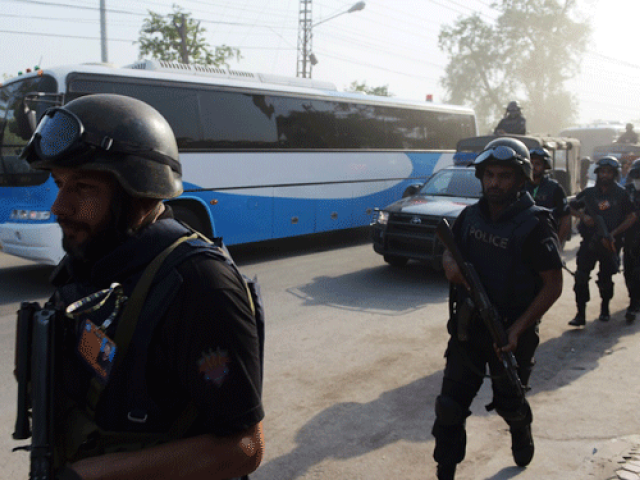 Despite Rashid's comments, Lahore police says it was a gas cylinder explosion and not a terrorist act. PHOTO: AFP

ISLAMABAD: Information Minister Pervaiz Rashid admitted on Saturday that a suicide bomber was responsible for an explosion outside Lahore’s Gaddafi Stadium that killed two people during a Pakistan-Zimbabwe cricket match, despite police insisting the explosion was accidental.

Friday’s incident, which triggered a news blackout in Pakistani media, came despite heavy security for the country’s first cricket series on home soil since an attack on the Sri Lankan team bus in March 2009.

“The suicide bomber failed to enter the stadium due to the bravery of our police,” Pervez Rashid told a private news channel.

The attack took place about 1.5 kilometres from the venue at “the outer security cordon of the stadium”, Rashid said, adding that it did not affect the match.

However, the incident did not affect the tour, according to a PCB spokesperson.

“The incident has not affected the tour, Zimbabwe’s tour will continue,” the PCB spokesperson said.

“Their players have gone shopping today.”

Zimbabwe’s team management was given a detailed briefing on the incident, the spokesperson said.

“They are satisfied with the arrangements, so the tour will continue,” he said.

The visitors were holding an internal meeting Saturday afternoon and could not immediately be reached for comment.

Security has been ratcheted up for the series with around 4,000 policemen guarding the stadium itself, and a further 2,000 along the route from the Zimbabwe team hotel to the venue.

The series, comprised of two Twenty20 matches and three one-day internationals, is the first since the 2009 attack on the Sri Lankan team left eight people dead.

After winning both Twenty20 matches, Pakistan also clinched the one-day series by chasing down a target of 269 in 47.2 overs in Friday’s meet.

The third and final one-day is to be played at the same venue on Sunday.

Despite Rashid’s comments, Lahore police insisted on Saturday that the incident was an “accidental blast” caused by an auto rickshaw’s gas cylinder exploding.

“It was a gas cylinder explosion and not a terrorist act,” a police spokesperson told AFP. He said one policeman and the rickshaw driver died.

Police had earlier said the blast was a transformer explosion.

The news was blacked out in Pakistani media until the conclusion of the match in order to prevent panic, a decision Rashid praised in his remarks.