Talks to The Expres­s Tribun­e about her upcomi­ng film ‘Jaana’ and hopes to make biopic­s
By Muhammad Asad Ullah
Published: May 29, 2015
Tweet Email 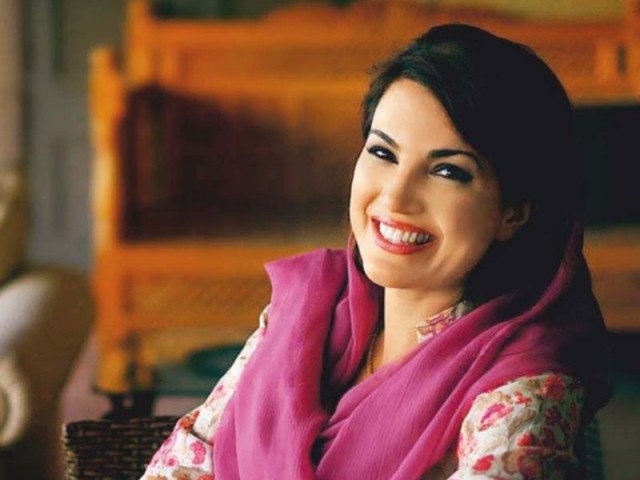 It seems time doesn’t hang heavy for Reham Khan as she juggles between the multiple roles she has taken up, most recently, of a filmmaker. Setting foot in an industry where people have long tread carefully, she comes with the will to promote a positive image of Pashtun culture and Pakistan. With spirits high and wearing a 100-watt smile, she talks to The Express Tribune about her upcoming film Jaanan and aspirations.

Reham has teamed up with Imran Raza Kazmi to produce Jaanan, a romantic-comedy about a Pashtun family, slated to release on Eidul Fitr next year. Lack of funds and infrastructure didn’t stop a novice Kazmi from venturing into filmmaking, with his 2013 feature film Siyaah. Reham says she’s open to working with new talent, bringing out the best her country has to offer. On working with Kazmi, she states, “It gives me even more courage to stand tall and not allow any negativity to be a hindrance in way of what I want to achieve.”

Aiming at promoting an image of Pathans far from their myopic depiction in international media, Reham will take the audiences on a trip to the panoramic Chitral, Parachinar, Swat and Peshawar through her film. “The most important reason for me [to take up filmmaking] is to promote the peaceful image of the Pashtuns,” says Reham. “And being a Pathan myself, who can better share their hospitality, kind-heartedness, especially towards women, and courage, than me?” she adds.

Reham hopes to pay homage to Pakistani legends, such as Allama Iqbal, Abdul Khaliq and Khushal Khan Khattak, through biopics, so that people on a global level become acquainted with the trials and tribulations they went through to achieve their goals. “We’ve seen India’s tribute to Milkha Singh in Bhaag Milkha Bhaag, but not many people know that he was beaten more than once in international races by Pakistani sprinter Abdul Khaliq, who has won 100 gold medals,” she states.

Married to politician Imran Khan, Reham clarifies her upcoming project has no political undertone. Reham says, “My intentions and conscience are clear. My aim is to contribute towards the improvement of our society.” She adds, “Filmmaking has two major advantages that contribute to my aim: it will help change the foreign media’s perception of Pakistan and be a source of relief and joy for locals.”

Reham feels filmmaking is a medium of communication, both nationally and internationally – one that can be used to promote Pakistan, its rich culture and society, and to tell the world about the unsung heroes, who have lived or are currently living in the country. “It’s a channel through which I can make a difference … however big or small,” she adds. As a new wave of filmmakers continues to lend impetus to the local movie industry, Reham hopes to play her part in doing the same. “I’ve identified an opportunity where I can, within the position I’m in, help rebuild our film industry. I know there are always benefits and drawbacks associated with bringing about change, but I also know it’s always a struggle when one tries to leave a positive impact,” she notes. With the youth constituting a major segment of Pakistan’s population, Reham feels it plays a crucial role in shaping socio-political developments. She calls for setting a platform through which young talent can surface in the country.

Reham laments that gone are the days when people would acknowledge artists, especially those who became part of the industry at a young age and have invested their blood and sweat into it. “People, such as Madam Noor Jehan, Badar Munir, Waheed Murad and Muhammad Rafi, were not always the stars they’re remembered to be … they, too, struggled,” states Reham. “Times were different then when people were generally more courteous and respectful … I hope those days will come again and artists these days are given the same respect preceding ones were given.”

Reham feels Pakistanis have been accepting towards the role of media as a clarion call for a change in societal mindset. “We’ve seen how Bollywood and Hollywood have improved their standing in the international arena showcasing their stories, culture, particularly language,” she says. “Taking that as an example, we can show the brighter side of our country and, hopefully one day, we will outshine the negative propaganda we so often get trapped in.”

With an indomitable will and hope to receive support and love from the people of her country, she notes, “All I’m trying to do is take one step at a time towards the bigger goal I have in mind. I need the support and love from my own people to achieve something that’ll be beneficial for us as a nation.” She further says, “If you have something to contribute to this aim, then I welcome you to join us in making a difference. Nothing in this world is achieved without perseverance and a sense of unity along with cohesiveness and patience.”

‘Waar 2’ to hit the floors next month