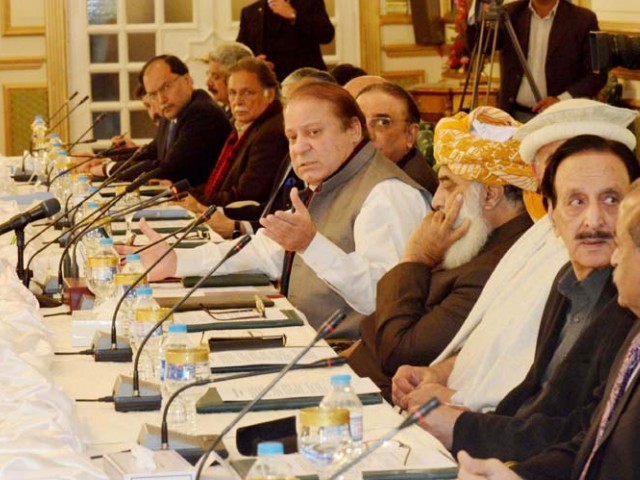 Extensive discussions were held with senior political leaders before the APC. PHOTO: PID

After the All Parties Conference (APC) held earlier this month over the China-Pakistan Economic Corridor (CPEC) remained inconclusive, the government has finally managed to address the reservations of stakeholders – but it was not an easy task.

Sources told The Express Tribune on Thursday that government put extra efforts this time round and gave separate briefings to senior political leaders at their doorsteps. In this regard, meetings were held with the leaders of Pakhtunkhwa Milli Awami Party (PkMAP), Pakistan Tehreek-e-Insaf (PTI), Qaumi Watan Party-Sherpao, Jamiat-e-Ulema Islam-Fazal (JUI-F) and Awami National Party (ANP). The consultation process completed just minutes before the APC.

Minister for Planning and Development Ahsan Iqbal had a daunting task ahead of him, but he knocked at the doors of different leaders and discussed with them all their issues at length. Reservations about the CPEC route were commonly expressed by all stakeholders and the minister faced a barrage of questions. The purpose, a source said, was to make sure the deadlock does not persist over the subject.

In this regard, Iqbal met Mehmood Khan Achakzai of PkMAP in the evening and JUI-F’s Maulana Fazlur Rehman at the dinner. Though Fazl’s JUI-F is in coalition with the ruling PML-N at the centre, he has never shied away from raising his party’s point of view over a certain issue.

The JUI-F chief said that Pakistan cannot afford to have trust deficit when it comes to relations with China and asked the government to address concerns of all the stakeholders. The JUI-F chief had asked the government to furnish documents to prove that Western route was on the cards before parliament as well as time frame for completion of Mianwali-Dera Ismail Khan section of the route.

The next meeting was at the residence of PTI’s Shireen Mazari where Shah Mehmood Qureshi and Asad Umer posed tough questions.

During the meeting, Qureshi was assured for national ownership of mega projects instead of a political party reaping political mileage. The PTI expressed concern that chief ministers of Balochistan and Khyber-Pakhtunkhwa were not being kept in the loop, to which government assured a comprehensive consultation process for all future projects.

While Aftab Sherpao proposed the matter be taken up at the Council of Common Interests (CCI), Maulana Fazl during the APC said since Parliament is supreme and there is a parliamentary oversight, therefore there is no need for taking up the issue at CCI.

Though all political parties posed tough questions, the ANP gave the minister ‘tough time’ in real sense as a team of experts along with party chief Asfandyar Wali was present well prepared. The ANP reportedly raised four questions, including one on the route, which were addressed by the government delegation. The meeting took place at Asfandyar Wali’s residence and ended minutes before the APC.

During the APC, Ahsan Iqbal told the participants that a working group comprising representatives of the provinces would study the feasibility of setting up viable economic zones along the Western, Eastern and Central routes.

The government also briefed the leaders about sites in all provinces where economic zones can be set up.