Pursuk­oon Karach­i hosts exhibi­tion inside Frere Hall on Friday­
By Our Correspondent
Published: May 24, 2015
Tweet Email 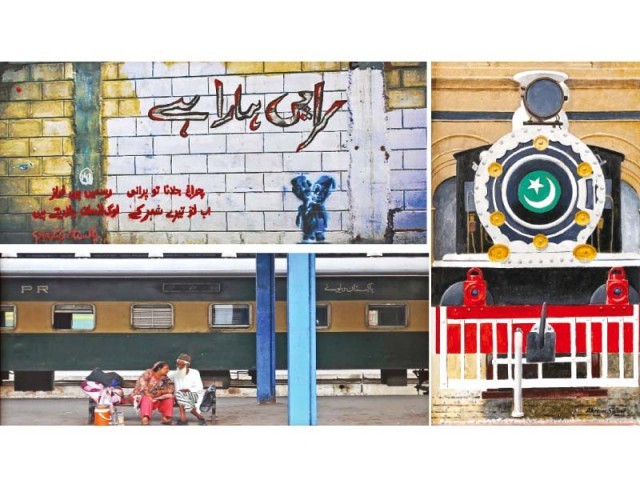 The auction was organised by Pursukoon Karachi and the artworks offered a variety of works demanding peace for the city of lights. PHOTO: COURTESY PURSUKOON KARACHI

A group of 120 artists have donated one piece from their collection to be auctioned for the Pursukoon Karachi’s Aghaz-e-Safar project. The proceeds from the auction will be used to restore Karachi Cantonment Railway Station.

The title, Aghaz-e-Safr [Start of a Journey], is fitting given the kind of works on display at Gallerie Sadequain in Frere Hall on Friday evening. One of the works on display showed a train track that seemed to point towards the next frame, taking the viewer on a journey.

Pursukoon Karachi’s core committee member Sadia Salim spoke about the donated pieces and how the money will be used to restore the historical railway station. “The work has been going on but the Sindh government’s funding is so little that we need to raise more funds,” she said. Pursukoon Karachi is a peaceful response to the violence that engulfs the city. It aims to bring peace back to the region.

In her piece titled ‘Tareekh-e-Inteha’, Salim used the form of birds sitting on the canvas, depicting how the end of everything is the beginning of a new journey.

For Numair A Abbasi, it is the luggage you carry during your journey that is focused in his work titled ‘Men in red feeling blue’. He seems to be inspired by the porters who load and unload luggage at the railway station. The drawing’s focal point is a shoulder — the shoulder that carries the luggage. “I have compared the journey of someone from the privileged class with that of someone from the other classes,” he said.

Nisa Karamatullah showed a mother wrapped in flowers. Talking about her untitled piece, Karamatullah said that it depicts one’s relationship with their motherland in the context of one’s own mother. “The flowers represent the good memories and constant give and take in a relationship,” she said. “I intend to show that we all are sticking to this place [Pakistan] because there was a time when it was worth it and we all are hoping it will be peaceful again.”

Anum Jamal also focused on memories in her work. Talking about her piece showing a lattu [top], she reminisced about the time when children used to play in the streets. “This work is basically a continuation of the last painting I made for Pursukoon Karachi’s exhibition,” she said. “It is pointing towards the importance of children playing outside like it used to happen at the time of our generation. It stresses on the restrictions that we now have in our society.”

The frames distributed by the Pursukoon team were creatively used by artists in different ways. Some showed origami birds sitting on a barbed wire, while other depicted buildings made of staple pins. The canvases were used as a window into the city and the journey related to it.

While some artists stuck to their signature style, such as Ather Jamal with his impressionistic painting of Empress Market, artist Agha Jan used his canvas as a chalkboard. Most of the artworks were inspired by Cantt Station. However, some artists took the meaning of a journey to different levels.

The exhibition included not just professional fine artists but people from all the different paradigms of art. The curator of the show, Meher Afroz, was present on the occasion along with Anwar Maqsood, Amean J, Ather Jamal, Sonya Battla and Naveed Sadiq among other famous names of the industry.