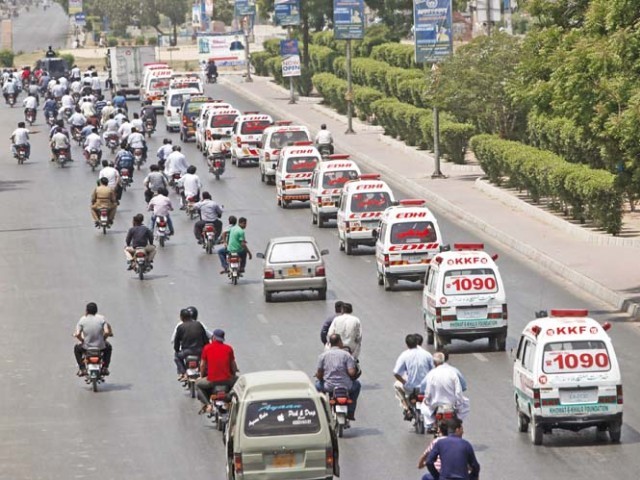 Ambulances transport the bodies to the graveyard on Thursday. PHOTO: ONLINE

The peaceful Ismaili community bid farewell on Thursday to 45 men, women and children who lost their lives in a bus shooting a day earlier.

The arrangements for the funeral were made at alAzhar Gardens, a gated colony where all the victims of the bus attack lived. The funeral committees of all the Ismaili jamatkhanas came to the colony on Thursday morning to help prepare for the 43 burials that took place that day, said an official of the community’s communications department.

They also organised the ceremony in which the families were able to have a last glimpse of their loved ones. After the funeral prayers, the other alAzhar Gardens bus and several other vans took the men to Sakhi Hasan graveyard where the deceased were laid to rest.

A line of female volunteers garbed in white kameez shalwar, with red-and-green stripes to signify the Ismaili flag, sat on the footpath inside the colony. Despite the presence of a large number of people, there was eerie silence in the colony, with most people simply staring into space, coming to terms with the loss of so many. The city also mourned the loss as most markets and schools remained shut.

Meanwhile, the burial of 17-year-old Sani Sultan Ali took place on Wednesday night in Salimabad. Merely a few hours after the funeral, two men of the community made rounds inside the colony to announce on their loudspeaker the demise of Nafeesa Farooq Makhnojia. They announced that her burial will take place the same evening.

The community, which has always kept a low-profile in the city, requested the media to avoid approaching the grieving families. The community members stayed together after the burial, as people went from one house to another for the afternoon lunch and condolences.

The Aga Khan Council for Pakistan president, Iqbal Walji, expressed his gratitude to the government, the armed forces, political leaders, civil society members and the general public for their messages of condolence. He also acknowledged the assurance given by the authorities to ensure the safety and security of the Shia Imami Ismaili Muslims residing in Pakistan.

He gave reference to His Highness the Aga Khan’s message stating that the Ismailis are a peaceful global community living in harmony with other religious and ethnic groups in many countries across the world.

The Ismaili Council of Pakistan’s communications head, Salimah Shiraj, said they will not be releasing any other statement at this point. She said that the six injured people are being treated and are not in critical condition.

The team has two female doctors who conducted the post-mortem of the 17 women while the other technical staff also participated in the investigation process that took nearly six hours. “It was not possible in any hospital of the city to carry out all post-mortems at one location,” said Dr Memon, adding that it was the community who helped the doctors’ team continue their work without any obstacles.

The team recovered only two pistol bullets from the bodies.

Necessary changes: Complaint boxes to be set up at police stations