70 touris­ts have visite­d Naran after access routes opened on May 2.
By Our Correspondent / Photo: SYED NOMAN SHAH
Published: May 8, 2015
Tweet Email 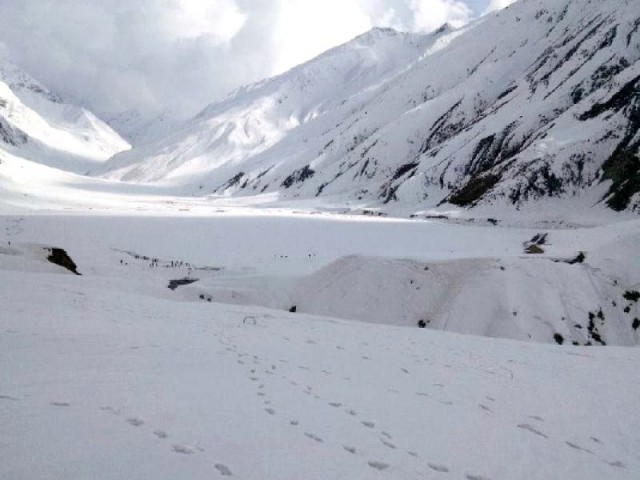 Kaghan Valley is a prime attraction at this time of the year. PHOTO: SYED NOMAN SHAH

BALAKOT: Tourists flocked to Kaghan Valley after an access route leading to the region was partially opened, residents and police officials told The Express Tribune on Wednesday.

The route was opened on May 2 and a group of 70 tourists from Punjab visited Naran.

According to an insider, the road from Balakot to Kaghan was blocked due to heavy snow and landslides between the last week of November and December 15. As a result, the region remained inaccessible for a little over four months which dealt a critical blow to the hotel industry.

So far, the National Highway Authority (NHA) has made efforts to clear the road between Ghanool and Kaghan. However, several other routes are likely to remain covered in snow until the end of May or the first week of June.

According to Muhammad Asif, a tourist guide, a large number of tourists began visiting the valley after the NHA cleared Balakot-Naran Road.

“Tourists have visited in groups,” he said. “The first group of over 70 tourists came from Punjab and visited Naran on May 2.”

Asif added that a group of youngsters also visited Lake Saiful Maluk which is frozen over at the moment. The lake, which is situated 11,000 feet above sea level, is completely covered in snow and is an ideal tourist attraction, he said.

“Tourists will continue to visit the lake until mid-June when the snow begins to melt.”

Ali Hussain, another tour guide, told The Express Tribune. “Kaghan Valley is a prime attraction at this time of the year. It has the potential to entice local and foreign tourists, provided roads are cleared and the security situation is under control.”

President of Naran Hotels Association, Seth Matiullah, confirmed the road had been cleared as far as Naran city.

“Tourists have started visiting the valley,” he said. “Access to these areas will help promote tourism and generate income for the government, local traders and hotel owners.”

Matiullah appeared to be optimistic about the growth in tourism. “Improvements in the security situation will encourage more tourists to visit Kaghan Valley until October. The hotels association has also decided to offer special Ramazan packages for them.”

A 15-kilometre-strip of Naran Road has been closed since the first snowfall in December. It was likely to be reopened for traffic by April 5 to make way for expected tourists, however, the initiative was delayed due to heavy rain in the area.

“We have cleared about seven kilometres from Rajwal during the last few days,” Najeeb Khan, an NHA official, said. “We will be able to make a jeep track by clearing the other strip of eight kilometres provided there is no more snow and rain.”

Left out: On sidelines of Medical Teaching Institutions Reforms Act