Solo exhibi­tion ‘Inanim­ate’ under way at My Art World.
By Our Correspondent
Published: May 3, 2015
Tweet Email 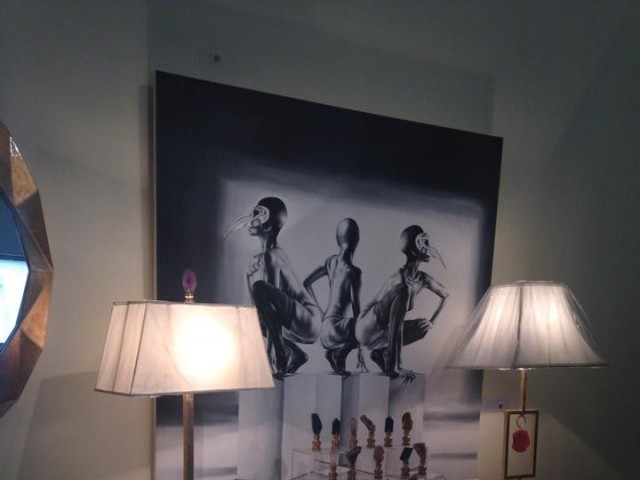 ISLAMABAD: A solo exhibition of paintings by Scheherezade Junejo titled “Inanimate” is under way at My Art World gallery.

The work is raw and intricate, which makes it beautiful. Junejo is a young artist and the freshness is visible in her work too. She told The Express Tribune that aspects of dance, mime, yoga and theatre have predominantly inspired her work.

“My work began as an observation of human behaviour through postures, movements and portions of anatomy”, said Junejo.

The echoes of polarity can be seen in various other ways as well; at times through the placement of animate with inanimate objects and at times through the symmetry of the conversation between the figures. “I see the world in colours of grey instead of black and white and that is exactly what I try to represent in my work”, she added.

Zara Sajid, the gallery curator, said Junejo’s work is raw and natural. “It shows the true and raw human form and features a blend of colors from black and white to livelier shades”, she said.

Zainab Omar, the owner of the gallery, said she had seen the artist and her work grow up. “For others, it may be about the human form but for me it’s about the use of light and shade and how particularly edgy her work is”, she said.

Junejo was born and bred in Karachi and graduated from the National College of Arts (NCA) in 2010.

Her work has featured in group and solo exhibitions at various art galleries in Pakistan and abroad, including the Royal Exhibition Museum, Melbourne; World Art Dubai; Mussawir Art Gallery, Dubai; and The Lalit Hotel, New Delhi.

Omar said the gallery aims to promote young artists and get their expression out in the market. The gallery also features an online store. The exhibition will continue till May 8.