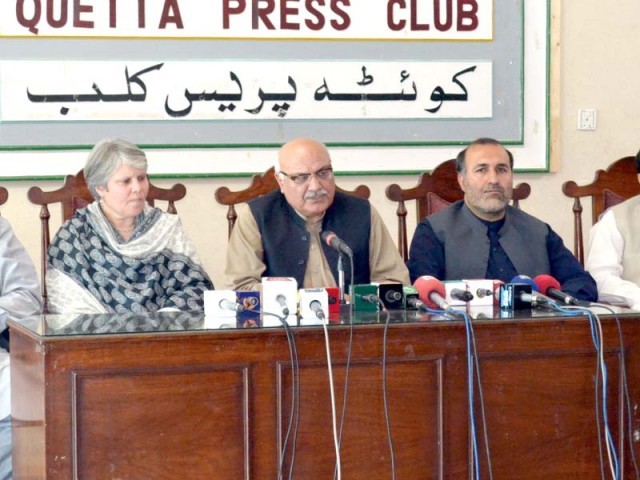 QUETTA: Awami National Party’s central secretary general Mian Iftikhar Hussain on Friday announced plans for a May 6 shutter down strike and a May 16 multiparty conference to campaign against any change in the Gwadar-Kashgar route. Any change in the economic corridor route could tarnish the country’s integrity, he said.

At the same time, he appealed to the authorities to begin work on the 3,000-kilometre project as soon as possible.

The strike is to be observed on May 6 upon the arrival of federal minister for planning in Quetta, while an All Parties Conference is to be called on May 16 in the provincial capital.

He said that it is essential to begin work on Gwadar-Kashgar route to strengthen the integrity of the country and to forge unity amongst its federating units.

“Integrity of the country is the most endeared thing, and it could be damaged by the change of the Gwadar-Kashgar route,” the ANP leader said. “The country’s development should not be made controversial [by changing the project’s route] so that Pakistan could benefit from the China-Pakistan Economic Corridor.”

He said that ANP had been struggling for the rights of the labourers and would continue to do so. “There is a huge bulge of labourers in our country but it has receded by and by.” He said that had this trend been promoted, Pakistan would have been a developed country in terms of industry and would have had a strong economy.

that the visit of Balochistan was aimed at taking in confidence other political parties on the issue of Gwadar-Kashgar route so that work could begin on the previous route.He said  Mian Iftikhar said all political parties, including the PML-N, PML-Q, PkMAP, BNP, BNP-A and PTI, have been contacted in connection with the APC. Leaders of all the parties have shown willingness to attend the conference, he added.

“The route had been under discussion since the times of the PPP government as railway line, energy projects and industrial zones were to be constructed on it, leading from Dera Ismail Khan, Zhob, Loralai and Quetta to Gwadar.”