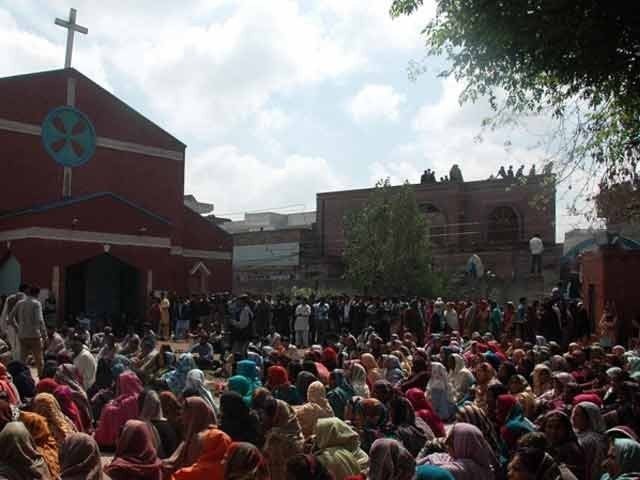 LAHORE: Several Christian leaders on Thursday demanded a judicial inquiry into the Youhanabad lynching after expressing no confidence in the police at a media talk in the city.

Pakistan Christian National Party chairman MA Joseph Francis said police had been raiding homes of Christians and holding them in detention instead of nabbing those responsible for the Youhanabad attacks. He said the force had been doing this at the behest of Pakistan Muslim League-Nawaz (PML-N) leaders. Francis said Christians were being victimised due to their confession.

He condemned the Youhanabad lynching saying that they did not believe in taking the law in their hands. Francis demanded exemplary punishment for those responsible for the deaths of two youngsters in the episode. He said some local Christians had handed over two “terrorists” to the police who were later set ablaze by an enraged mob. Francis said the force had deliberately handed them over to the charged mob. He declined to comment on allegations of murder against Christian leaders Sohail Johnson and Aslam Pervaiz Sahotra saying that it was premature to pass remarks on the subject.

PCNP senior vice chairman Martin Javed Michael said Christian residents of Youhanabad had been living in constant fear of the police. He said the force had adopted a discriminatory approach against Christians in the wake of provocative speeches by Chief Minister Shahbaz Sharif and Interior Minister Chaudhry Nisar. Michael said over 400 Christians had been arrested and were being held in torture cells without visitation. He said Christians had been living in constant fear due to these developments.

Michael said Muslims owned 300 shops in the area and lived peacefully with Christians in the locality. He claimed that Ghulam Hussain, the alleged mastermind of the Youhanabad attacks, had been arrested. Michael said the police should make its investigation public and take Christians into confidence on this account. He also demanded all arrested Christians to be released.