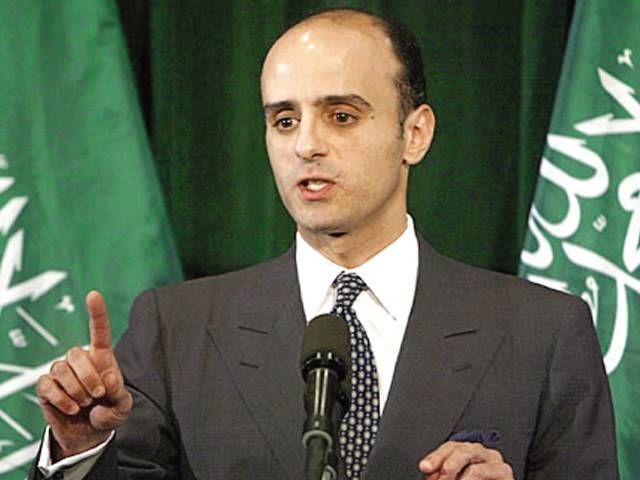 audi Arabia’s ambassador to the US Adel al Jubeir is quoted saying, “We in Saudi Arabia are not observers in Pakistan, we are participants.”

KARACHI: In a US embassy cable published by WikiLeaks, Saudi Arabia’s ambassador to the US Adel al Jubeir is quoted saying, “We in Saudi Arabia are not observers in Pakistan, we are participants.” That statement sums up decades of Saudi Arabia’s involvement in Pakistan’s political affairs.

While the UK and the US appear to play a visible role in the country, as Zardari is quoted as telling the US ambassador, “We won’t act without consulting you”, it has now emerged that Saudi Arabia is also a behind-the-scenes broker.

In 2000, many of Nawaz Sharif’s supporters were somewhat stunned as they watched a news broadcast of the man who vowed to “eat grass” if it meant Pakistan would have nuclear capability, waving them goodbye from a car. He was on his way to Saudi Arabia, where he would spend several years in exile until he returned to Pakistan in 2007. In the kingdom, Sharif was a “guest” of the royal family, and conditions set by the Musharraf government for his exile included that Sharif would not serve time in jail, forfeit Rs500 million in property, would not return to Pakistan for 10 years and would be disqualified from holding public office for 21 years. A leaked memo reveals that prior to his return to Pakistan, Sharif had “promised the king to avoid questioning Musharraf’s recent political decisions in public.” Sharif had been serving a life sentence for a hijacking case when he was suddenly acquitted and left the country. But he had friends in powerful places. According to a 2000 Telegraph report, “Saudi Arabia’s Crown Prince Abdullah, who negotiated the deal, had threatened to cut diplomatic ties with Pakistan if his friend Sharif was not freed.”

But even though, as Ambassador al Jubeir is quoted saying, “Sharif broke his promise by conducting political activity while in the kingdom,” he is still a key figure for the Saudis. Saudi Foreign Minister Prince Saud al Faisal is quoted saying in a cable that Sharif is a “force for stability” and “a man who can speak across party lines even to religious extremists.” A US official also noted that the “Saudis have an economic hold on Sharif, since he was reportedly the first non-Saudi to receive a special economic development loan from the Saudi government with which to develop a business while here in exile.” It is evident that were Sharif to take charge again, he would have the backing of the kingdom.

The other “winning horse” in the Saudis’ book is the military. Praise flows for the military in leaked cables, with General Ashfaq Parvez Kayani described as a “good man”. The Saudis also emphasised the need for the military to be a stabilising influence and reiterated their support for former president Pervez Musharraf in 2007. “With all his (Musharraf’s) flaws,” al Jubeir reportedly said then, “he is the only person that you (the US) or we have to work with now.”

Even though the Pakistan-Saudi Arabia relationship is referred to in glowing terms in government-issued history books and official statements, leaked cables reveal that Saudi Arabia’s support of Pakistan is conditional on who is at the helm of affairs. The current Pakistan Peoples Party (PPP)-led government has found its relationship to be under strain because of a number of reasons. The kingdom, according to leaked cables, has historically disliked the PPP and fears that Zardari, who it suspects is Shia, could be part of a Shia triangle in the region (with Nur al Maliki’s government in Iraq and Mahmoud Ahmedinajad’s in Iran). This has also affected aid, as well as an agreement to provide oil to Pakistan at concessionary terms.  Zardari has built strong ties with Iran, which is reportedly one of the reasons for the kingdom’s disapproval.

But even countries like the US understand the kingdom’s role, as is evident from cables reporting meetings between US and Saudi Arabia government officials. In a March 2009 cable, with tensions high over the long march, then-US ambassador to Pakistan Anne Patterson wrote, “We should encourage Zardari to continue efforts to ease tensions and ask the Saudis and the UAE to weigh in with their respective allies.”