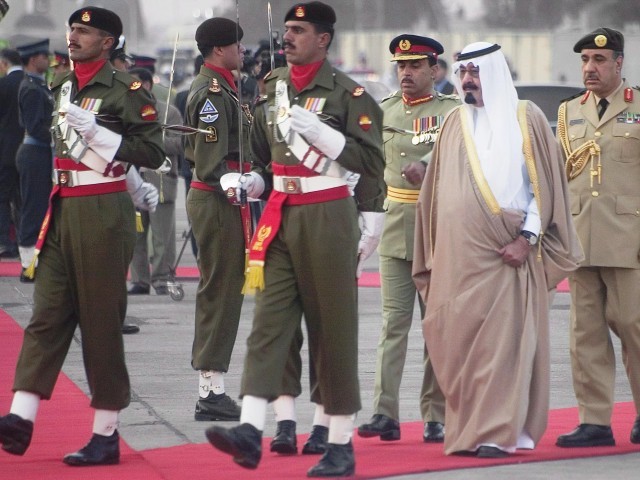 File photo of the Saudi King on an earlier visit to Pakistan. PHOTO: EPA

ISLAMABAD: Saudi Arabia appears to have made little or no damage control effort after the leaked US diplomatic memo that suggests the Saudi King’s ‘dislike’ for President Asif Zardari.

Though Pakistan wasted no time in rejecting the WikiLeaks disclosure, the Saudi government has neither issued a clarification nor established any contact with the Pakistan administration, The Express Tribune has learnt.

The United States informed both Pakistan and Saudi Arabia in advance about what the leaked documents contained.

However, the Saudi government did not make any effort to clarify its position on Shah Abdullah describing President Zardari as the biggest hurdle to Pakistan’s progress.

“There has been no contact yet between the two sides on the controversy,” said a top foreign ministry official.

On Tuesday, the Saudi foreign ministry gave its first reaction over the leaked cables but preferred not to offer any comments about the King’s purported remarks towards Zardari.

Although, it did clarify the Kingdom’s position on Iran, saying Riyadh is not finding any authenticity in the leaked documents that claim the Saudi King urged the US to attack Tehran.

“The WikiLeaks revelations are not something that we didn’t know … the only difference is that now this has been made public,” said a top foreign ministry official.

But analysts say the mysterious silence from Saudi Arabia on the King’s remarks directed at President Zardari is an indication that the two countries are not enjoying the cordial relations that they once had in the past.

This is the reason that President Zardari has yet to pay an official visit to Saudi Arabia since he became head of State, said official sources.

They disclosed that in 2008 when Zardari visited the Kingdom as co-chairman of the Pakistan Peoples Party, along with the delegation headed by Prime Minister Yousaf Raza Gilani, the Saudi King initially refused to meet him.

However, he was eventually given an audience with the Monarch after hectic diplomatic efforts, sources add.

Despite repeated attempts, the US Embassy could not be reached for comment.

Meanwhile, Pakistan has asked US to take action against the officials who leaked confidential information to WikiLeaks.

“We expect strict action against officials involved in leaking this information,” remarked an official while speaking on the condition of anonymity.

The WikiLeaks, which posted some 200 cables written by US diplomats on its website over the last weekend, revealed that Washington had been exerting pressure on Pakistan since 2007 to grant it access to the country’s nuclear facilities.

The disclosure, according to many Pakistanis, confirms their fears that the US is after the country’s nuclear programme.

“This will certainly create more anti-Americanism in Pakistan,” the official warned.