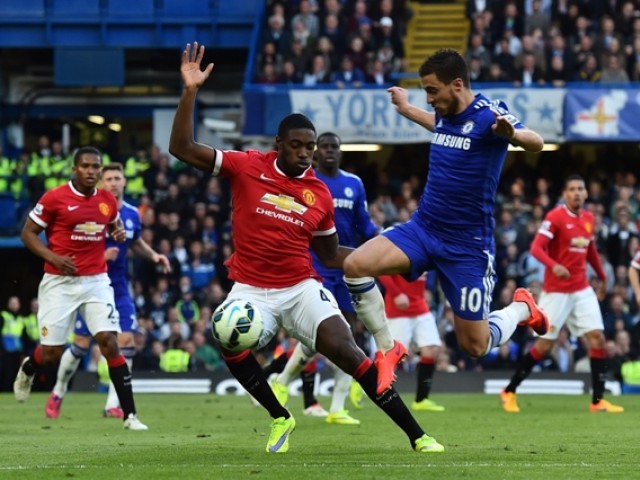 The usual suspect: Eden Hazard was the hero once again for Chelsea as a 1-0 win over Manchester United has practically handed the title to the Blues, who enjoy a 10-point advantage over second-placed Arsenal. PHOTO: AFP

LONDON: Chelsea manager Jose Mourinho attempted to dampen the euphoria emanating from Stamford Bridge after his side closed to within two wins of the Premier League title by beating Manchester United.

Eden Hazard’s 38th-minute strike gave Chelsea a clinical 1-0 home victory on Saturday that means they will be champions if they win their next two games away to Arsenal and third-bottom Leicester City.

Mourinho was overstating the distance between Chelsea and a first league crown since 2010, because with Arsenal their nearest rivals — 10 points back in second place — six points from their next two games will suffice.

Having won their previous six league games, United largely controlled the game, enjoying 70 percent of possession, and hit the post through Radamel Falcao in the second half.

There was also an injury-time scare for the hosts when United midfielder Ander Herrera went down under a challenge from Gary Cahill in the Chelsea box, only to be booked for diving by referee Mike Dean.

“Always you are dependent on the referee,” said United manager Louis van Gaal, who claimed that his team had produced their “best match of this season”. “When he whistles, it’s a penalty. When he doesn’t whistle for a foul on Falcao, it’s not a foul. My opinion is different, but OK, it’s like that and I cannot control the referee.

Manchester City strengthened their grip on fourth place in the Premier League with a 2-0 win at home to West Ham on Sunday but at the cost of seeing David Silva carried off on a stretcher.

The influential Spanish playmaker was on the receiving end of what appeared to be an accidental elbow from West Ham’s Cheikhou Kouyate midway through the second half and needed lengthy treatment on the field before being taken off the field amid concerns he might miss the rest of the season.

Reigning champions City’s hopes of a successful title defence were all but over before last week’s 4-2 derby defeat by Manchester United.

But this win saw them move to within a point of United and, significantly, go seven clear of fifth-placed Liverpool, having played a league game more than the Merseysiders.

“At this moment he [Silva] is in hospital and they are checking if he has a broken bone in his cheek,” said City manager Manuel Pellegrini. “The referee was very near. He decides what happens and gave a yellow card. I hope that it was an accidental collision.”