Shades of grey: For Ayaz Jokhio, black and white are full of colour

Shades of grey: For Ayaz Jokhio, black and white are full of colour

The artist's latest exhibi­tion is on displa­y at the Koel Galler­y till April 27.
By Yusra Salim
Published: April 18, 2015
Tweet Email 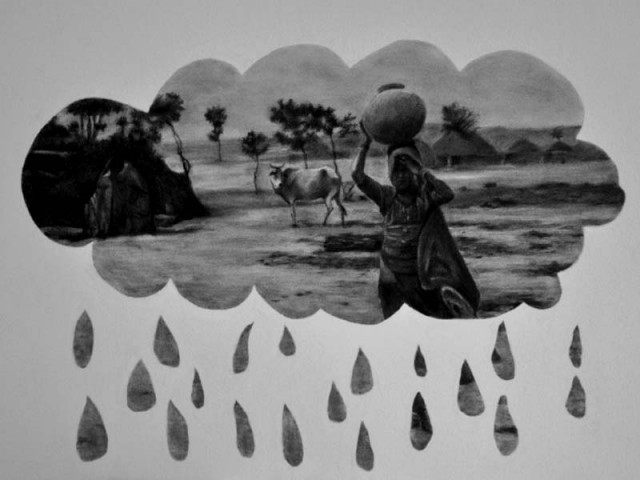 Ayaz Jokhio’s works are primarily in black and white but the images inside them appear to be in full colour. PHOTO: COURTESY KOEL GALLERY

KARACHI: In a black and white picture, an umbrella can be of any colour, limited only by the viewer’s imagination. Compare that with pictures that are full of colour – what is yellow can only ever be yellow.

That is how artist Ayaz Jokhio explains the concept behind his latest exhibition, ‘Ideas are Black and White’. Merging dual meanings into one, his seven pieces, depicting subjects such as a drought situation, a flooded village and a car journey in the ‘quick and rough’ medium of charcoal drawings on paper, were put on display at the Koel Gallery on Thursday. The exhibition will run till April 27.

Clarifying the essence of his colourless illustrations, he said, “It is in black and white that incompleteness exists, waiting to be filled by the viewer. We add colour to pictures through our perceptions.” For Jokhio, his ideas have always been like drawings, sketched out like black lines on the white paper of his thoughts, similar to a child’s fill-in-the-blanks exercise.

“To make art and to enjoy it, one needs the curiosity and innocence of a child as well as wisdom,” he believes. “Every child is an artist – the problem is how to remain one when you grow up.” His piece ‘Gadi’, showing what a child sees out of a car window, reflects this viewpoint.

Jokhio’s work is a connection of multiple concepts. “All these pieces are a blend of two ideas that complement each other,” says the artist from Mehrabpur, Sindh, who graduated from the National College of Arts in 2001. “For example, in ‘Matko’ – one of my favourite pieces – I tried to capture the entire sea within a small pot.”

Meanwhile, ‘Nang’, another piece, shows how a rope can become a snake with the help of one’s imagination. “Having previously worked with words and language, I wanted to depict some life.”

Gesturing towards his widespread artwork ‘Landscape’, which was inspired by a drawing made by one of his students, he points out that a map of a place is very different from what you actually see there, no matter where you travel. “These 40 maps of various countries, such as Pakistan, India, Australia and Sri Lanka, show the landscape, from the sky to the land, from homes to the road,” he explains.

The multidisciplinary artist, who teaches at the School of Visual Arts and Design at Beaconhouse National University in Lahore, has held numerous exhibitions in Pakistan as well as Switzerland, Germany and Japan.