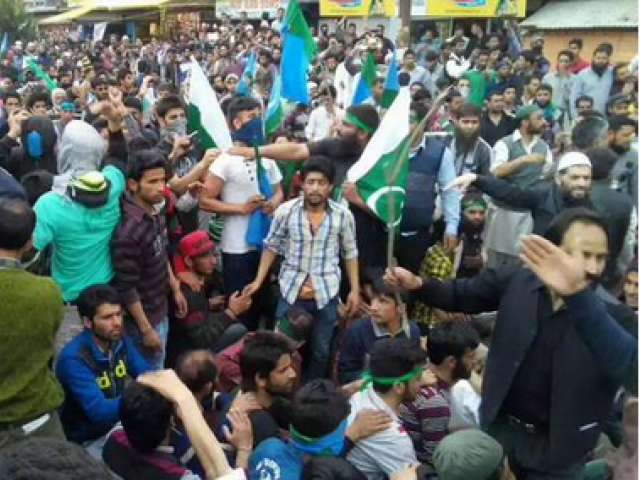 According to Express News, Kashmiri leaders had organised a rally against the atrocities of the Indian state in Kashmir.

The Times of India reported that Alam also allegedly chanted pro-Pakistani slogans during the rally.

47-year-old Alam is a likely successor to Geelani. He was released from prison after four years on March 7.

India reacted furiously following the show of support for Pakistan at the Srinagar rally.

“We expect the state government of Jammu and Kashmir, headed by Mufti Saeed, to take cognizance of the matter,” Rao added.

The way Pakistani flags were being raised in a protest in Srinagar is completely unacceptable: GVLN Rao on Masarat Alam & SAS Geelani (ANI)

We expect State govt of J&K headed by Mufti to take cognizance of the matter: GVL Narasimha Rao (ANI) pic.twitter.com/xa8vffxkHj

Earlier in March, an FIR was registered against Kashmiri leader Asiya Andrabi for unfurling the Pakistani national flag on March 23 in Srinagar. She was booked under the ‘Unlawful Activities Prevention Act’.

The fearless Asiya is the chief of Dukhtaran-e-Millat, a women’s wing associated with the Hurriyat. She allegedly sang the Pakistan national anthem as well after unfurling the flag.