The diseas­e has not paraly­sed baby Yasir, who was tested in Latt Basti villag­e in Bin Qasim Town
By Sameer Mandhro
Published: April 14, 2015
Tweet Email 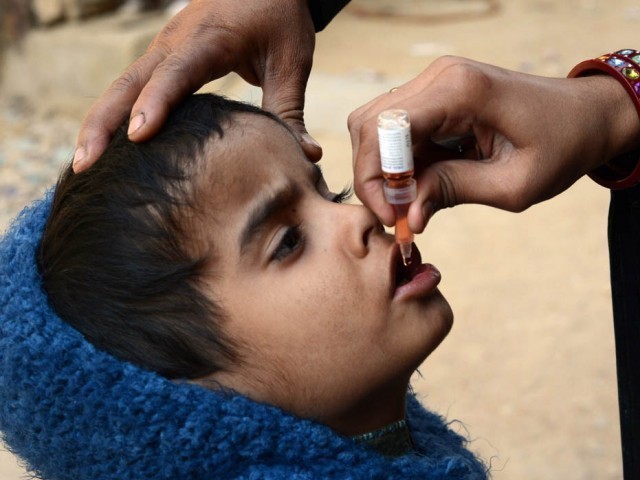 KARACHI: Yasir is the first child to test positive for polio in his village, Latt Basti, in the last 10 years — or is he?

The one-year-old boy has been lucky enough to have recovered significantly. No part of his body is completely paralysed by the virus. His family refuses to believe that he has polio, while health officials insist that he does.

In November 2014, the health officials declared Yasir, the son of Habibullah Jat, as the second case of polio in union council (UC) 2, Bin Qasim Town, and the 25th case in the province for the year. After he was diagnosed, the UC he lived in was also declared to be among the city’s super high-risk areas for the virus.

Village elders say that Latt Basti, located on the beach close to mangrove trees, dates back to 1935. Neglected by the authorities, the village is dotted with mounds of garbage with no one to remove them. There is no sewage system, filthy water pools in the streets and children often defecate in the open.

Yasir’s family had not left the village since he was born. Polio workers have left their mark on his house several times; records show that they had administered the polio vaccine to him at least four times.

According to Yasir’s grandfather, Haji Yaqoob, the baby was taken to a nearby hospital when he started crying with pain in his elbow. “The doctors referred him to Jinnah Postgraduate Medical Centre, and a few days later, we were told that he has polio.”

That, however, was not the end of the story. Yaqoob goes on to explain that Yasir’s mother began rubbing his affected arm with hair oil. “His arm wasn’t working properly at first but now he can move it easily,” he smiles.

Yaqoob, himself a hepatitis C patient, believes that Yasir’s illness is the outcome of the lack of cleanliness in Latt Basti. “The children get diseases because of where they play and live. Nothing comes from outside the village,” he says, glancing at the sewage water lying stagnant outside the house.

“With the limited resources that we have, we cannot give much attention to our children,” he explains, adding that Yasir’s father, a fisherman, was often away from home in search of his livelihood. “But we never turn away the polio vaccination teams,” he claims proudly.

In fact, the refusal rate in the village is almost zero. “I myself monitor the campaign; I know Yasir was given the polio drops,” says Sikandar Ali Jat, one of Latt Basti’s influential people. “There is no refusal and all the villagers cooperate with the health workers, knowing that it is beneficial for their children.”

The villagers and Yasir’s family members, including Yaqoob, do not believe he has polio — after all, they say, he can move his arms and legs perfectly, and affected children cannot move like healthy ones.

However, the former provincial deputy project director of the Extended Programme on Immunisation, Dr Durre Naz Jamal, has no doubt about it. “He is a confirmed polio case. The vaccines he received are the reason why he is not completely paralysed.”

Dr Jamal claims that the virus will not paralyse any children who have received the vaccine. Emphasising the need to give polio drops to every child, she states that in most cases, the children in Sindh who were detected to have the virus despite being administered the vaccine were not completely paralysed.