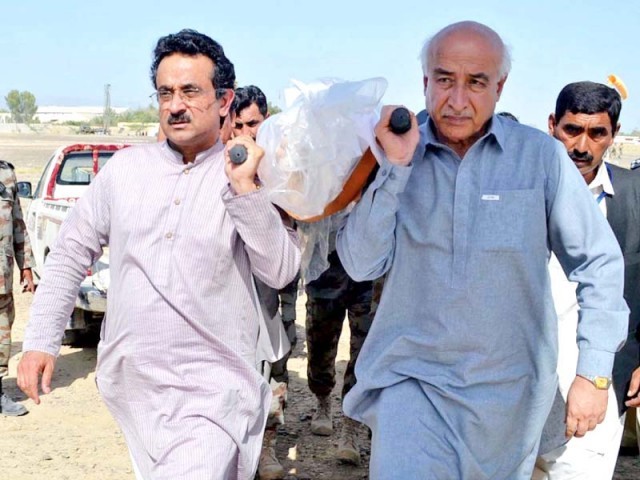 Gunmen shot them at point blank range after identifying they were from Punjab and Sindh. The outlawed Baloch Liberation Front (BLF) claimed responsibility for the attack amid reports that a small Levies contingent deployed for the security of the construction workers fled when the killing spree began. They were subsequently suspended and taken into custody for their failure to challenge the attackers.

More than 20 gunmen stormed the camp set up near a construction site where the labourers were sleeping and started shooting them, Pasand Khan Buledi, the commissioner of Makran division, told The Express Tribune. At least 20 workers were killed on the spot and three others were wounded. The attackers fled the scene unchallenged and without a trace. “They had lined them [labourers] up and shot them at point blank range after identifying who they were,” Home Secretary Akbar Hussain Durrani said. “The Levies personnel were guarding the labourers but fled when confronted by a large number of armed attackers.” Levies official Sultan Mehmood, however, said the personnel initially put up a fight but fled after a brief firefight as they were outnumbered by the attackers. “The Levies personnel informed the headquarters about the attack, but within 15 minutes the gunmen encircled the camp and started the methodical killings,” he added.

One of the injured, identified as Muhammad Ashraf, told The Express Tribune said they were woken from their sleep by the sound of gunshots and screams. “The gunmen barged into the camp and opened fire at us,” Ashraf said who also received bullet wounds which, medics say, are not life-threatening.

Turbat is the hometown of Chief Minister Dr Abdul Malik Baloch, who was in neighbouring Gwadar district at the time of the massacre.

The bodies of the victims were taken to the District Headquarters Hospital Turbat for autopsies. “At least 16 of the victims are from Sadiqabad district of Punjab and four from Tharparkar district of Sindh,” Levies official Muhammad Aman said. “We are contacting their relatives and making arrangements to transport the bodies to their hometowns.”

The labourers hired by a local contractor Zareef Rind were working on construction of a small local bridge in the Mirani Dam Road area, about seven kilometres away from Turbat city.

Home Minister Mir Sarfraz Bugti blamed ‘foreign-funded armed groups’ for the massacre. “The groups funded by Indian secret agency RAW cannot destabilise our state. They will be chased and killed or captured,” he told a news conference at the Chief Minister Secretariat.

“Levies and police were guarding the camp but they did not respond on time and showed negligence which resulted in the loss of 20 innocent lives,” Bugti said. “I’ve ordered the arrest of the Levies personnel deployed at the camp,” he added. “We will take departmental action against them as there is no place for cowards in our law-enforcement agencies.”

BLF spokesman Gohram Baloch claimed responsibility for the execution-style killings in a phone call to a news agency. He said the labourers were working on a road which was part of the Pakistan-China Economic Corridor – a project that, he claimed, would not benefit the people of Balochistan.

Incensed by the bloodbath, labourers from Sindh and Punjab working on different construction projects in Turbat blocked the main highway to condemn the mass killings of their colleagues. They demanded the government arrest the killers and compensate the bereaved families.

The chief minister cut short his Gwadar trip and rushed to Turbat to attend the mass funeral for the slain labourers. “The killing of innocent labourers is condemnable,” he said. He added that the federal government was assisting his administration in maintaining law and order in the province – but the law-enforcement agencies were facing a shortage of weapons and other equipment.

Nevertheless he claimed that the overall security situation in the province had improved considerably. He added that after the Turbat massacre his administration would review the security situation and ensure that such tragedies did not take place again.

It is not the first time that day-labourers have been targeted in the restive province. The BLF has frequently carried out deadly attacks on labourers, Frontier Works Organisation officials and security forces. Construction work on Mirani dam was also stopped due to frequent attacks by militants.