The projec­t aims to bring life back to parks and public spaces.
By Our Correspondent / Photo: Athar Khan
Published: April 12, 2015
Tweet Email 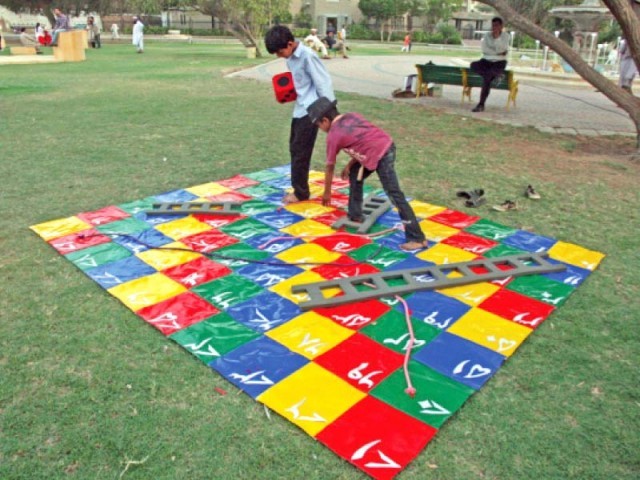 Children are playing on the snakes-and-ladders installation at Frere Hall on Saturday. This is one of the 24 installations on display for the public at the Numaish Karachi – Urban Intervention in Public Space. PHOTO: ATHAR KHAN/EXPRESS

KARACHI: The gardens of Frere Hall came alive as ‘Numaish Karachi – Urban Intervention in Public Space’ kicked off, welcoming the young and the old together on Saturday.

‘I Am Karachi’, working in collaboration with the Habib University, aims to create an ambience of social interaction in Karachi through Numaish by stimulating healthy exchanges among the public. By bringing life back to parks and public spaces, the project also aims to incorporate education and social learning a tad bit differently from what kids learn at schools.

Starting at Frere Hall, Numaish will travel to three other locations of Karachi and will finally culminate in Machar Colony. Speaking to The Express Tribune, Numaish curator Saima Zaidi said that there is a built-in presence of fear among Karachiites that needs to be addressed. “While we were busy in the launch of this project, we realised this is what people want,” she said.

According to her, the project redresses the lack of availability of public spaces that families can visit. “Time and again people have asked us if it is really free,” she said. “Can we just sit down and read in the open library, they ask.” She believes that, since an environment of claiming public spaces does not exist, it is hard for the people to believe when there is one available for them.

As the sun set, the video on Karachi Circular Railway by Ivan Sigal started playing and the solar-powered coiled barbed wire, titled ‘Overview Karachi’, lit up. All the people roaming around the lawns of Frere Hall sat down, with their eyes transfixed at one view or the other.

Up to 24 standing installations and artefacts by artists, students, designers and engineers were on display. These included a variety ranging from rides, open library, a seating structure made in the shape of a honeycomb, a Newton’s cradle, the Ludo board game and much more.

As the project will move along in the coming months, each place will be donated an installation as a permanent structure to the setting. For Frere Hall, the open air library will now be a permanent feature. “It goes with the theme of Frere Hall,” said Zaidi. “It already hosts a gallery and from tomorrow book stalls will be put up too.”

Numaish Karachi will be up in the Frere Hall gardens till April 22.