On display: What’s in the Constitution of Pakistan?

On display: What’s in the Constitution of Pakistan?

The public can go see the origin­al copy of the countr­y’s 1973 Consti­tution at the nation­al museum till Sunday­
By Our Correspondent / Photo: AYSHA SALEEM
Published: April 10, 2015
Tweet Email 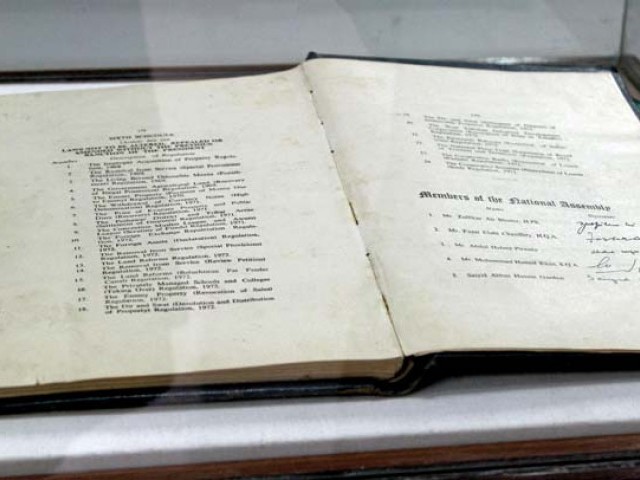 The National Museum of Pakistan, Karachi, is displaying the original copy of the 1973 Constitution of Pakistan, bearing the signatures of the members of the then National Assembly who signed it. PHOTO: AYSHA SALEEM/EXPRESS

KARACHI: The National Museum of Pakistan, Karachi, has opened its doors for one of the most important documents in the country – the original copy of the 1973 Constitution of the Islamic Republic of Pakistan.

The Constitution is on display at the museum in honour of Constitution Day (April 10) and will be available for public viewing till Sunday, April 12.

The first page of the Constitution reads: “Pakistan shall be a Federal Republic to be known as the Islamic Republic of Pakistan here-in-after referred to as Pakistan.” It listed names of 146 members of the National Assembly in 1973. Out of these 146 MNAs, 141 had signed the Constitution. Names of the missing five include Mian Mahmud Ali Kasuri, Dr Abdul Hayee Baloch, Mr Abdul Khaliq Khan, Haji Ali Ahmed Khan, Rais Atta Mohammad Khan and Nizamuddin Haider.

Sindh Assembly MPA and provincial law minister, Dr Sikandar Mandhro was present at the museum to inaugurate the exhibition. He said that it was important to protect and preserve history for a nation to survive.

“Even the smallest village of the country has some rare collections that need to be protected,” he said. “It is every citizens’ responsibility to preserve our country’s history and heritage.”

While speaking to The Express Tribune about the amendments made to the 1973 Constitution, the minister said that no one but elected representatives of the Parliament had the right to amend it. “Our Constitution has suffered the most at the hands of dictators. After the 18th Amendment, we know there were certain things that came under notice and were removed accordingly,” he added.

Among the salient features of the Constitution on display is Article 268(2) that points out 18 laws that are not to be altered, repealed or amended without the previous sanctions of the President. These include the Land Reforms Regulation 1972, Withdrawal of Currency Notes High Denomination Regulation 1971 and The Privately Managed Schools and Colleges, Regulation 1972.

The director of the national museum, Muhammad Shah Bukhari, said that that at first the original 1973 Constitution was placed in the museum in Islamabad but they sent it to us after the 18th Amendment. He added that the museum did not put it on display for the public on regular days.

Pak-Russia ties: ‘The world needs force of law, not law of force’