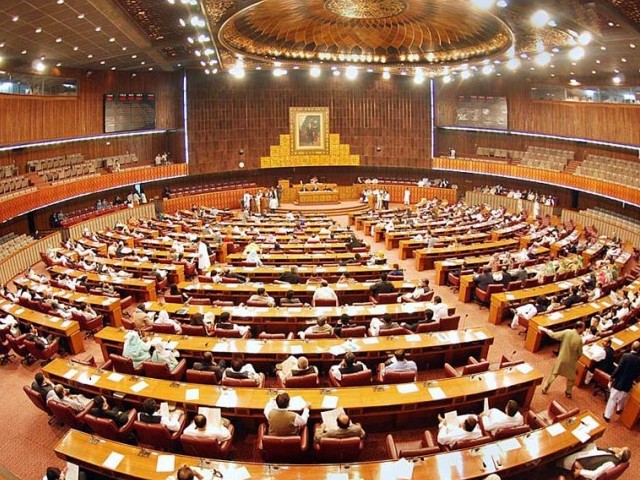 ISLAMABAD: Parliament on Friday urged the government to stay out of the conflict in Yemen where the Saudi-led coalition is bombing Huthi rebels.

A unanimous resolution passed by a special joint session of Parliament backed the government’s commitment to protect Saudi Arabia’s territory, which has so far not been threatened by the conflict.

But it said Pakistan should play a mediating role.

The motion came after five days of debate on the Yemen crisis, in which the majority of lawmakers urged Prime Minister Nawaz Sharif not to send Pakistani forces to join the fight.

Pakistan has pushed diplomatic efforts in the past week, holding talks with Turkish and Iranian officials to try to forge a way ahead.

Friday’s resolution urged the government to begin work in the UN Security Council and the Organisation of Islamic Cooperation bloc to bring about a ceasefire.

Below is the text from the draft resolution: According to Radio Pakistan, the resolution states: “Pakistan will stand shoulder to shoulder with Saudi brethren in case of any threat to its territorial integrity”.

The resolution urges government to move the United Nations and the Organisation of Islamic Cooperation to bring about an immediate ceasefire in Yemen.

“Pakistan and other Islamic countries should work together for peaceful resolution of issue while promoting unity of Muslim Ummah,” the resolution further adds.

As per the resolution, Pakistan will remain neutral in Yemen war and play an active role in mediating peace, Express News reports.

The resolution was adopted unanimously by the Lower House.

“Pakistan can play the role of a mediator in the current Middle East crisis,” Soomro says.

The lawmaker says PM Nawaz, along with the ministers should visit various Muslim countries in order to defuse the tension in the Middle East, Radio Pakistan reported.

Prime Minister Nawaz Sharif has summoned a meeting of parliamentary leaders of various political parties today to give them an in-camera briefing on the Yemen conflict and develop a consensus on the resolution draft presented in the joint session of parliament, sources privy to the development told The Express Tribune.