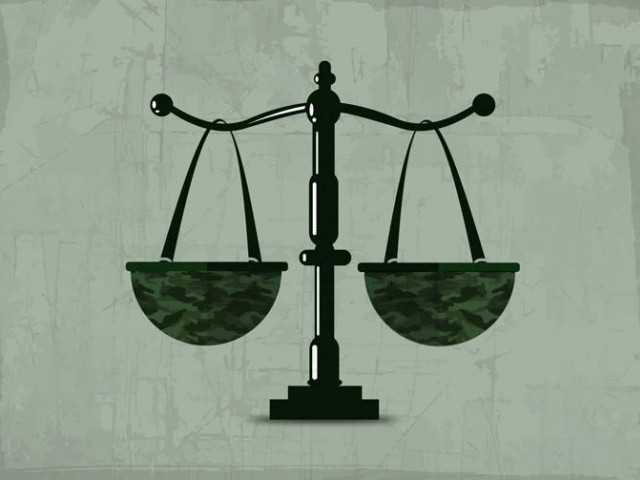 KARACHI: The newly-established military courts are unlikely to start functioning in the province anytime soon as the authorities pass the responsibility onto each other about the authority to transfer militancy-related trials pending in the anti-terrorism courts (ATCs).

Sources told The Express Tribune on Wednesday that the home authorities recently approached the Sindh High Court (SHC) chief justice Faisal Arab, the chief secretary and others to ask for the transfer of trials of three cases relating to armed attacks on law enforcement agencies, registered against Tehreek-e-Taliban Pakistan (TTP) militants.

The home department’s letter, dated April 2, stated that the provincial prosecutor general had advised approaching Arab as the competent authority to transfer the three cases from the ATCs to other courts, such as the military courts.

The home department also provided a list, which named two cases relating to attacks on Rangers personnel and the police.

A judicial official, who did not wish to be named, opined that it was not necessary to obtain the CJ’s order to transfer the pending proceedings from the ATCs to the military courts. “The relevant ATC is empowered under Section 23 of the Anti-Terrorism Act (ATA) of 1997 to transfer any proceedings to another relevant court of competent jurisdictions,” he explained.

Judicial sources added that Arab has yet to pass any order on the provincial government’s request for transferring the trials.

The cases in question

The provincial authorities had scrutinised 64 cases relating to militancy, recommending them to the federal government for trials to be conducted by the military courts. These courts were established under Islamabad’s new National Action Plan, formulated to counter terrorism after the Army Public School attack in Peshawar on December 16, 2014.

Initially, three cases were given final clearance to be transferred to the military courts.

The first case relates to a roadside bomb blast that killed three Rangers personnel and wounded four others within the limits of Sachal police station on December 9, 2011. An alleged member of the TTP, identified as Muhammad Farhan Khan alias Ali alias Abbas alias Aijaz Qadri, was arrested in connection with the case, an FIR 808/2011 registered under Sections 302, 324 and 34 of the Pakistan Penal Code (PPC) read with sections 4 and 5 of the Explosives Act and section 7 of the ATA. His alleged accomplice, Attaullah alias Attari alias Naeem Bukhari alias Bilal, was declared an absconder in the case.

In the second incident, deputy superintendent Kamal Khan Managan, ASI Akbar Hussain and head constable Fazal Khan were killed in a bomb blast within the limits of Quaidabad police station on January 24, 2013. An FIR 30/2013 was registered at Sacchal police station under sections 302, 324 and 34 of the PPC read with sections 4 and 5 of the Explosives Act and section 7 of the ATA.

The third case pending trial before the ATC relates to an attack on law enforcers and possessing illegal arms and explosives. Three different FIRs — 369/2013, 370/12 and 371/13 — were registered against alleged TTP member Asad Ali alias Bhai Jan, under sections 353, 324 and 34 of the PPC, section 13-D of the Arms Ordinance and sections 4 and 5 of the Explosives Act at the Garden police station.

A sad day for shopaholics: The DHA Sunday Bazaar is no more