The actor had suffer­ed a should­er injury during the shoot of ‘Bajira­o Mastan­i’
By News Desk
Published: April 5, 2015
Tweet Email 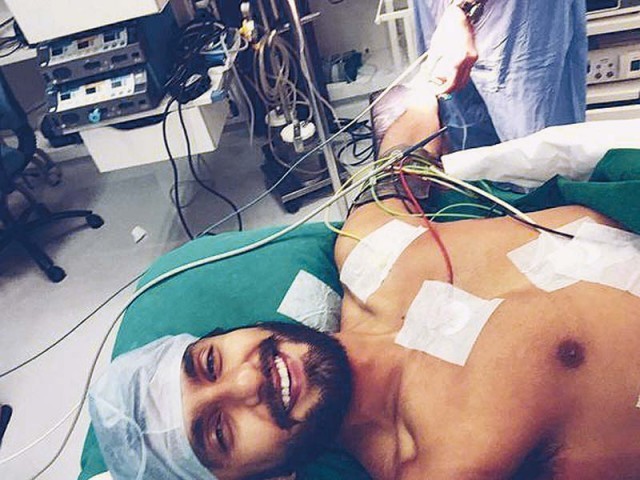 Minutes before his surgery the actor seemed to be enjoying his time rather than dreading what was to come. PHOTO: TWITTER

Facing an injury during the shoot of his new film, Bajirao Mastani, Ranveer Singh had to go for an operation but that didn’t stop him from updating his fans, the Raam-Leela actor live tweeted even when he was undergoing anaesthesia.

The actor is known to perform ridiculous stunts; this time however, he fell off his horse during the shoot of Bajirao Mastani and injured his shoulder. At first he dismissed the injury as mild and went for physiotherapy, but when that failed to help, he was forced to check himself into a hospital for surgery scheduled for Saturday morning.

It didn’t deter Ranveer from tweeting and sending a smiling selfie for his fans as he lay on the operation bed. Minutes before his surgery was due, all wired up, the actor seemed to be enjoying his time rather than dreading what was to come.

The love was, however, not one-sided; the concerned fans returned the love making ‘All The Best Ranveer’ a Twitter trend in India. Even our famous singer Ali Zafar tweeted in concern for the actor.

Following the recovery, the actor has been advised to rest for a month before he can continue doing his stunts or any fight sequences. His film is due to release end of this year around Christmas.

He will be also starring in another film, Zoya Akhtar’s family drama Dil Dhadakne Do in which he will be romancing his rumoured ex-girlfriend, Anushka Sharma. The cast also includes Priyanka Chopra, Farhan Akhtar, Anil Kapoor and Shefali Shah.