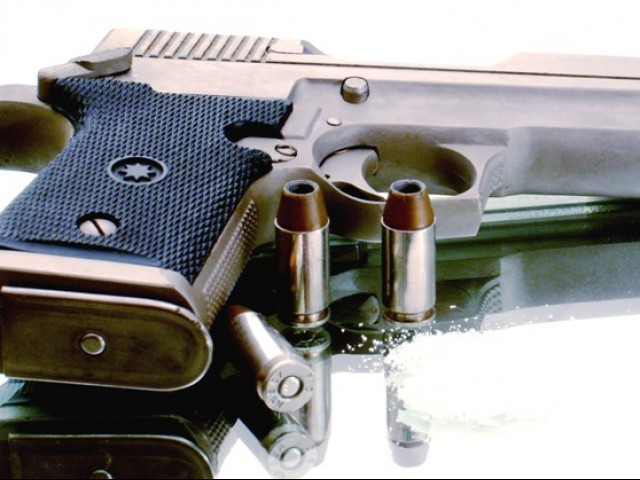 Forty-year-old Chandio’s death is the second high-profile killing of a journalist in the city. The murder has caused panic in the city with major markets and shops being closed down. Journalists and residents took to the streets, demanding the immediate arrests of the culprits.

According to the police, Chandio, who was the bureau chief of television channel Awaz TV, opened his door to three men on a motorcyle at around noon. The men fired at him and Chandio was rushed to Civil Hospital, Mirpurkhas where he succumbed to his injuries. After his death a large number of people took to the streets and journalists blocked the main road.

Later, Chandio’s body was shifted to his home where the namaz-e-janaza was offered. The deceased hailed from Dadu district but was currently living in Mirpurkhas with his spouse.

Mirpurkhas DIG Rasool Bux Sandh said that Chandio had been a political activist affiliated with the Jeay Sindh Qaumi Mahaz.

Later on, he joined the Dadu district police as an additional sub-inspector.

He was let go from the police due to his political affiliation, claimed DIG Sandh. The DIG was not able to comment conclusively on the reasons behind this killing.

According to journalists, Chandio had joined the Sindhi daily Tameer-e-Sindh as a reporter. He went on to work at Sindh TV and then later joined Awaz TV.

Sindh Chief Minister Qaim Ali Shah and home minister Dr Zulfiqar Mirza have ordered the formation of a committee to investigate this killing. The committee will be supervised by DIG Sandh and counts Mirpurkhas DPO Zulfiqar Mahar and Sanghar DPO Abdul Shaikh as members.

Journalist Sarfraz Ahmed said that Chandio had been elected as the president of the press club for the third time. Earlier, he was the general secretary and was known to be an active reporter in the district. Journalists from Mirpurkhas, Umerkot, Sanghar and Tharparkar districts sat in front of their press clubs wearing black arm bands. They urged officials to capture the culprits and alleged that this was a ‘target killing’. The Pakistan Federal Union of Journalists has condemned the murder and demanded an immediate arrest.

Journalist and Daily Jang Mirpurkhas bureau chief Zubair Ahmad Mujahid was killed on November 23, 2007 in Satellite Town police limits. No arrest had been made to date.