The 40-day period starte­d on Februa­ry 18 and will end with Easter Sunday on April 5.
By Haniya Javed
Published: March 29, 2015
Tweet Email 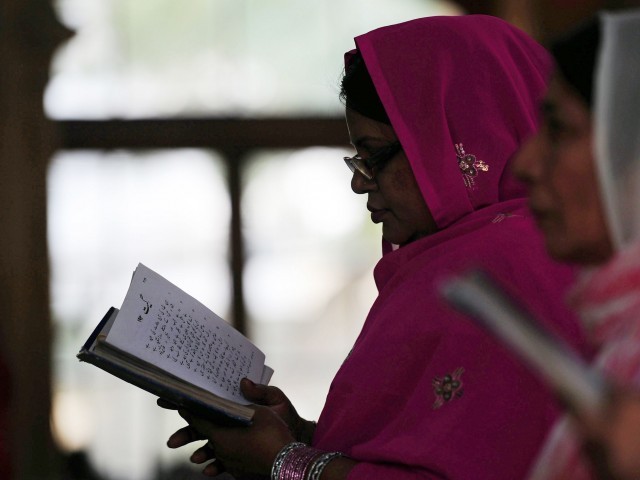 Prayer masses are held in churches each morning and evening where people are urged to do good, pay alms and abstain from giving into temptations. PHOTO: AFP

KARACHI: The Christian residents of the city are observing the season of Lent that begins on ‘Ash Wednesday’ and goes on for a period of approximately six weeks before culminating on ‘Easter Sunday’.

Throughout the period, members of the community engage in fasting, prayer, penance, repentance of sins, atonement and self-denial. The primary purpose of the period is amplified in the commemoration of the Holy Week, which marks the death, burial and resurrection of Jesus.  The period of Lent traditionally lasts 40 days, in commemoration of the 40 days Jesus spent fasting in the desert.

“Fasting for us is very personal; it is a matter between us and God. Since Jesus didn’t have it easy when he fasted for 40 days during Lent, we shouldn’t make a big deal out of it either,” explained a newly-graduated student, Viviana Rodrigues. This year, Pakistan’s Christian community is observing the 40 days of Lent that started on February 18 and will end just before Easter, scheduled on April 5 this year.

The season started on Ash Wednesday, when the priest marks a cross of ash on the believers’ foreheads. This act stems from the belief that man was gathered from dust and will eventually return to dust. Prayer masses are held in churches each morning and evening where people are urged to do good, pay alms and abstain from giving into temptations. On Fridays, also known as meatless Fridays, people opt for simple food preferably pulses and vegetable or sometimes fish.

Their work routine usually the same. “It is the first time that I’ve ever heard the concept of facilitation during Lent,” says Father and Pastor, Robert, the academic dean at the National Catholic Institute of Theology, Karachi. “There is no point in fasting if you create issues for others and pose yourself as important by seeking unnecessary treatment.”

“The Church inscribes Ash Wednesay and Good Friday (the last Friday before Easter on which Christians believe Jesus was crucified). Other than that, it is really an individual’s choice whether or not to fast,” adds Viviana.

Her thoughts are shared by many Lent-practicing Christians. According to Michelle Pinto, Lent is not about conditions. She says one can fast for 24 hours or 12 hours or just fast from dawn to evening as there is no obligation; it is more a personal spiritual experience. “Relaxation in working hours or leaves from work wouldn’t make Lent any different than it already is. However, some companies do offer concessions to their Christian employees, if requested. It really varies from employer to employer.”

Julia, a teacher at a local missionary school regards Lent as a good time of the year, when colleagues help ease each other’s burden. While many have never thought of Lent as much of a big deal, Vanessa Dias, a banker by profession holds a different view. According to her, asking for some slack had never hit her, mainly because being a minority in Pakistan may have negative repercussions. “There are policies of optional offs and with Easter falling on Sundays only, we don’t want them really.”