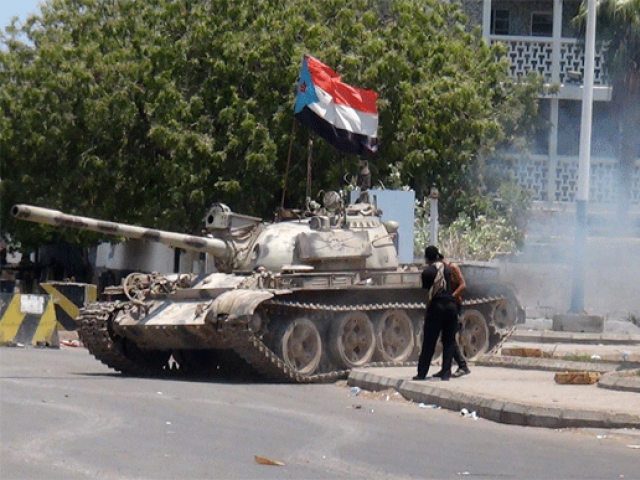 A tank bearing the flag of southern seperatist movement, which was confiscated from a military depot, is driven on a street in the southern Yemeni city of Aden. PHOTO: AFP

SANAA: At least 39 civilians have been killed in more than 24 hours of Saudi-led air strikes against Shia rebels in Yemen, health ministry officials said on Friday.

Twelve of the victims died when a raid against a military base north of the capital Sanaa hit surrounding residential areas, officials from the rebel-controlled ministry told AFP.

Saleh is the son of ousted president Ali Abdullah Saleh, who is accused of allying with the Huthi rebels against President Abedrabbo Mansour Hadi.

They also bombed a Huthi-controlled army brigade in Amran province, north of the capital, and arms depots in the rebel stronghold of Saada further north, residents said.

A military official told AFP that on Thursday Saudi-led coalition jets also bombed a large arms depot in a third army camp used by forces loyal to the former strongman.

The official spoke of “dozens” of casualties at the camp, located in Sanaa’s southern outskirts, but the information could not be independently verified.

In central Sanaa, an anti-aircraft missile wounded eight people, one of them seriously, when it exploded in a market on Friday, a day after it was fired by Huthi fighters, a security official said.

According to residents, dozens of vehicles carrying anti-aircraft missiles have been continuously circling the capital’s neighbourhoods since the Saudi-led raids began.